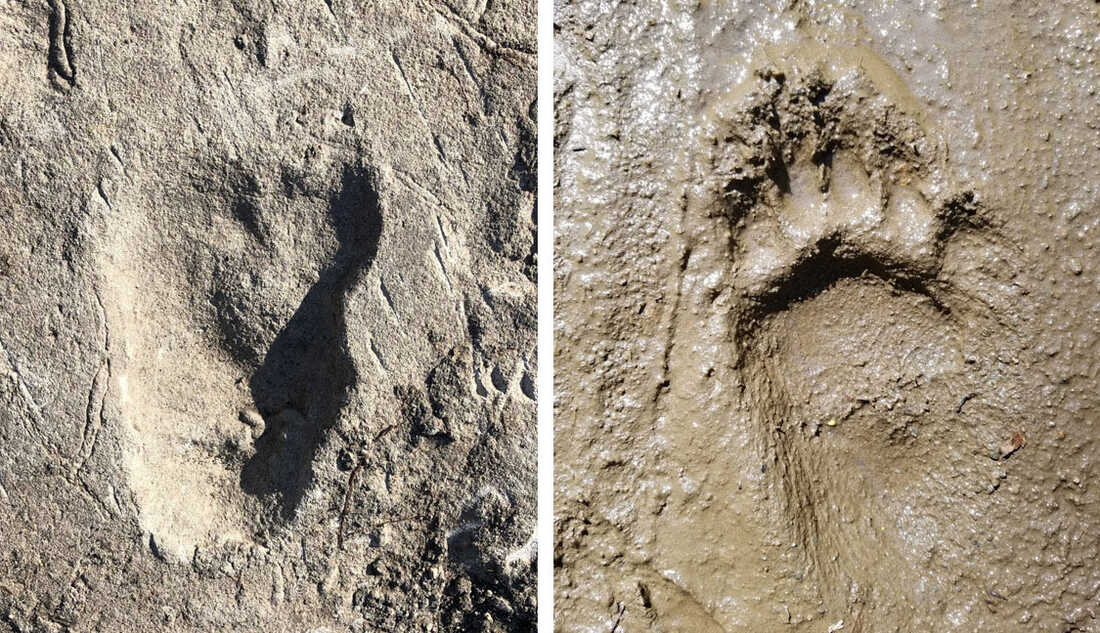 On the left, a nearly 3.7 million year old fossil footprint now believed to have been made by an early human. On the right, the rear footprint of a young black bear.

On the left, a nearly 3.7 million year old fossil footprint now believed to have been made by an early human. On the right, the rear footprint of a young black bear.

The early humans who walked the earth nearly 3.7 million years ago were not walking alone. Fossil footprints in Tanzania reveal that two human species once lived in the same place at the same time.

Scientists had long thought that one set of unusual prints there was left by a bear walking on its hind legs, but a new analysis published in the journal Nature suggests that’s not right. Instead, it appears that the tracks were left by some unknown early human species that was strolling around that spot at the exact same time as Australopithecus afarensis — the species of the famous partial skeleton “Lucy.”

Australopithecus afarensis has long been assumed to be the only human species living way back then, and scientists have considered it an ancestor of modern humans. But recent discoveries of other remains, such jaws and skulls and foot bones, have hinted that an unexpected diversity of hominins may have lived during this period.

These ancient footfalls were trapped by a volcano

At this particular pre-historic site, at Laetoli in northern Tanzania, all of the footprints were made in the same layer of mud. That means individuals from these two early human species must have passed through within hours or days of one another, says Ellison McNutt, a biological anthropologist at the Ohio University Heritage College of Osteopathic Medicine.

It’s possible that the unknown species that made the weird footprints could have “looked up across the landscape and saw an Australopithecus afarensis walking somewhere else,” she says. “It’s really cool that we may have two hominin species, at least, living at the same place.”

McNutt studies bipedalism because walking on two legs is a unique and distinctive human trait. “It’s a very strange way of kind of moving through the world, and it’s very different from other animals,” she notes, adding that how and why humans evolved to do this is still a mystery. “This seems to be one of the things that sort of makes hominins and our lineage very different from the other living primates.”

And walking upright seems to go way back in human evolution. Millions of years ago, a volcano erupted and covered Laetoli in ash. That ash turned to mud, and all kinds of creatures left tracks; when the volcano erupted again, another layer of ash preserved them. In the 1970’s, paleontologists uncovered tracks from animals including ostriches, giraffes, hyenas, and, of course, what was later identified as Australopithecus afarensis.

At the same time, the workers uncovered another set of tracks that also seemed to show bipedal walking, but those didn’t look so distinctively human. Eventually scientists decided they must have been left by a young bear, given that bears lived in Africa back then. A bear’s hind feet can look somewhat human, bears can walk bipedally, and they don’t always leave distinctive claw-prints.

“It was kind of a reasonable thing, sort of,” says McNutt, who adds that the more instantly-recognizable footprints from the human species were so exciting that these other ones got ignored for decades.

She came across a reference to these forgotten footprints, however, while studying bear bipedalism while a graduate student at Dartmouth College. She realized that she and her colleagues could test the bear hypothesis with the help of a nearby rehabilitation center for black bears in New Hampshire. It had young bears with paws of a comparable size to the footprints.

“We ended up with four little juvenile bears that we had stand up and walk through mud for either applesauce or maple syrup, which was very cute, as their reward at the end of it,” she explains.

Walking on two legs may have happened more than once

By examining the footprints left by the bears, and comparing them with the mysterious fossil footprints as well as human footprints and chimpanzee footprints, the research team determined that the fossils’ features looked more human-like. It looks like the feet must have had a relatively large “big toe,” for example.

What’s more, the walking pattern preserved in the tracks shows a kind of cross-step, with the foot crossing in front of the mid-line of the body. People sometimes cross-step while walking over uneven surfaces or regaining their balance.

“That actually is one more piece of evidence that it’s not a bear,” says McNutt, “because bears don’t have the anatomy at their hip and their knee to allow them to stand up and maintain their balance while cross-stepping.”

The researchers also looked at more than 50 hours of videos taken of wild black bears and found that they hardly ever walk on their hind legs. “When a bear stands up, he’s usually holding on to a tree,” says McNutt. “Or maybe he’ll take a step or two, but he doesn’t usually take four or more, which is what you’d really need to get to the five we have preserved at this site.”

All of this evidence has convinced Stephanie Melillo, a paleoanthropologist at the Max Planck Institute for Evolutionary Anthropology in Germany who was not part of the research team. “They do a very convincing job of showing that the prints are not made by a bear,” she says, and adds the prints’ shape does suggest that they were made by an unknown early human.

“If it’s the case that this is a second species, this discovery shows that Australopithecus afarensis and something else were really in the same time, at the same place,” says Melillo, who notes that this kind of link is harder to make with such precision when fossilized bones are found at other sites.

And it means that bipedalism didn’t necessary evolve once and proceed in an ever-progressing straight line to how modern humans walk today, but rather that different versions could have existed simultaneously in different branches of the family tree.

Footprints, unlike bones, capture an actual behavior of early humans, and let scientists imagine these distant but familiar species strolling across the land at Laetoli.

“This site is unique,” says Melillo. “It’s not just these two hominins. We see these hominins together with birds, and with antelopes and hyenas, an entire African ecosystem of animals. It really does give you a really good image of what kind of environment the hominins were occupying.”