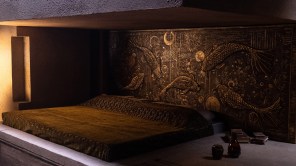 Production designer Patrice Vermette, who with Dune marks his fifth feature collaboration with Denis Villeneuve, knew what a precious childhood dream the Frank Herbert novel was to the filmmaker.

“For Denis, it was always important to have immersive environments,” says the production designer about the pic’s set construction, “we embraced the old Hollywood style.”

You can listen to the 100th episode of Deadline’s Crew Call here:

This meant a mix of real environment and set extensions for the massive VFX shots. The film’s VFX supervisor Paul Lambert’s provided a good rule of thumb for the duo: the more sets built, the more realistic the world of Dune.

“We needed to anchor our story into a realism, almost like it was a documentary,” explains Vermette, “If you have a strong anchor and people relate in it, they’ll believe in the more fantastical aspect of the story: When there’s a giant sand worm, you believe it because you’re anchored in something realistic.”

Several murals and hieroglyphics in the film detail the extensive set design, creating the ancestral history of the competing galactic houses and peoples –the House of Atreides, House of Harkonnen and the Fremen desert dwellers on Arrakis– all of whom are jockeying for control of the hottest commodity in space, the spice melange. In one shot, the movie’s hero Paul Atreides, played by Timothée Chalamet, walks in front of a mural of a sandworm well before we’ve seen the creature bust through on screen. Like a church stained glass window, that walled-in sculpture is meant to represent a mythological creature who commands respect, like a godlike figure.

Villeneuve and Vermette discuss why Jordan was the ideal desert location for Arrakis, how insects inspired Dune‘s aviation, as well as what to expect in Dune: Part 2.

Dune is now off the HBO Max streaming service, exclusively in theaters. The movie returns to Imax this weekend. Seventy minutes of the movie was shot in Imax, the large format exhibitor a huge driver of the pic’s overall $373.7M global box office.