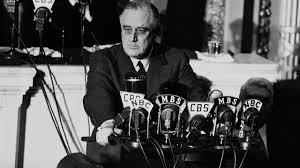 • Security for those who need it.
• The ending of special privilege for the few.
• The preservation of civil liberties for all.
• The enjoyment of the fruits of scientific progress in a wider and constantly rising standard of living.

These are the simple, the basic things that must never be lost sight of in the turmoil and unbelievable complexity of our modern world. The inner and abiding strength of our economic and political systems is dependent upon the degree to which they fulfill these expectations.

Many subjects connected with our social economy call for immediate improvement. As examples: We should bring more citizens under the coverage of old-age pensions and unemployment insurance. We should widen the opportunities for adequate medical care. We should plan a better system by which persons deserving or needing gainful employment may obtain it.”

He was right—simple and basic things based on decency, compassion and common sense to ensure domestic tranquility and promote the public good. What a perfect contrast to the “ideals” of anarchy and dictatorship being celebrated today by Republicans on their new high holy day. I’ll take FDR’s vision, thanks. I just never quite got the hang of knuckle dragging.

And now, our feature presentation…

Note: The Department of Tyranny Resistance reminds you that January 6th is “Change the Batteries in Your Bullshit Detector Day.” Be sure to test its operational ability by saying “Republicans are patriots” until it screeches less than one second later. Thank you and have a fact-filled day.  —Mgt.

Date on which Blackberry ended its service on mobile devices: 1/4/22

Number of Americans who quit their jobs in November, which economists say is a sign that the job market is bouncing back strongly from the Trump Recession: 4.5 million

Current yearly production schedule for the Lightning due to a surge in demand: 150,000

Percent of 5-17-year-olds fully vaccinated in Vermont, the highest among all states: 70%

Rank of the Czech Republic, Namibia, Austria, Germany, and Poland among countries with the greatest beer consumption in 2021: #1 – #5

Oh boy! Starting the year off briskly, lending it such tone already, such cachet, such je ne sais quoi—those Republicans are so special, aren’t they? Their first move, first rat out of the trap, top priority: lower ethics standards. Yessiree, this 2005 is going to be quite a year.

Let’s put that to a vote. Many problems before us—Iraq, a Social Security “crisis,” a real health care crisis, world terrorism, our international reputation possibly at its lowest ever … who is in favor of lowering ethics standards first? Who thinks ethics standards in Washington are too high? […]

Now, I’m not going to conclude that Fascism Is Upon Us just because we have an administration that not only can’t find the Constitution but apparently doesn’t know there is one. Too early in the year for that. Long way to go. Got to save your indignation. But it is unpleasantly reminiscent of Watergate, isn’t it? That’s what we’re looking at here, folks—not just constitutional deafness, but moral turp as well. All we need is one bag job and an alert night security man.

Puppy Pic of the Day: This is the church, this is the steeple, open the doors and see all the… Hey, wait a minute…

JEERS to dates that will live in infamy. December 7, 1941 and September 11, 2001 were attacks from the outside. But like April 12, 1861, January 6, 2021 was a 100-percent inside job. One year ago a mob of rabid Republicans, brainwashed by right-wing media and their own gaslighting leaders (who continue to brainwash and gaslight with even greater intensity), stormed the U.S. Capitol with clubs, spears, guns, teargas, and even a portable gallows. Their goal: stop the certification of the 2020 election results and re-install, by force, their duly defeated president, who watched the action on TV with a big grin on his face in the White House dining room. It was the culmination of a coup attempt that had been discussed and planned right down to the tiniest details in memos sent around by Trump’s lieutenants, and even the murder of Trump’s own vice president was fair game to the nut jobs.

Lots of harsh words were said for a few days after the insurrection, some participants will spend a few weeks or months in prison for their violence and vandalism, and the House has formed a Very Special Committee to look into it. But nothing changed. And no one really believes that the next Republican coup attempt will fail. So, as we wait for President DeSantis to take the oath in 2025 by force, watch this…

I’m told it’s how all the cool kids pass the time these days.

CHEERS to making an appearance. I have some good news to report. Merrick Garland is alive, conscious, tan, rested, and in good spirits. Now the bad news: yesterday’s big speech on the eve of the January 6th insurrection anniversary was little more than a dry tutorial on what the Justice Department does, interspersed with tantalizing criminal-catching stuff that “may” or “might” or “could” happen at some point in the future, language that could easily turn into “woulda,” “coulda,” and “shoulda” when the Republicans run out his clock. And you know what else he said? He said that the rich and powerful would be treated the same way in the criminal justice system as the poor and powerless. Some say the rimshot could be heard from space.

CHEERS to the couple that keeps on keepin’ on. Congratulations to George and Martha Washington on their 263rd wedding anniversary:

The marriage took place at Martha’s estate; she was intelligent, gracious, and experienced in managing a planter’s estate, and the couple created a happy marriage. … They moved to Mount Vernon, near Alexandria, where he took up life as a planter of tobacco and wheat and emerged as a political figure.

CHEERS to getting in on the transportation gig. Big news yesterday. Sony says it wants to make electric cars:

The electronics giant has teased its interest in the auto industry during prior appearances at CES but, this time, Chairman, President and CEO Kenichiro Yoshida confirmed that Sony is setting up its own mobility unit. And to give show attendees an idea of what he has in mind, Yoshida pointed to a seven-seat, all-electric sport utility vehicle.

Referencing the response to a Sony SUV concept revealed two years ago, Yoshida said, “The excitement we received after we showed off the (original) Vision-S really encouraged us to further consider how we can bring creativity and technology to change the experience of moving from one place to another.”

Breaking into the cutting-edge vehicle production industry is extremely difficult. So to entice customers, every SUV purchase comes with a free Sony Walkman. (Before you scoff, it’s the model with auto reverse so you don’t have to turn the cassette over. And bass boost, too!)

CHEERS to…maybe the start of something big? I stopped holding my breath for anything a long time ago (my dead Grandma was getting irked with all the “come into the light, Billy” false alarms), so I’ll just say this about the employment numbers for December: more like this, please (via MSNBC):

U.S. employment grew solidly last month, capping a strengthening trend in the nation’s job market in the second half of 2011. The economy’s payrolls increased by 200,000 in December…[surpassing] economists’ expectations and mark[ing] a six-month stretch in which the economy generated 100,000 jobs or more in each month. The nation’s jobless rate slipped to 8.5 percent, its lowest level since February 2009.

Among the winning sectors: transportation, warehousing and retail. Among the losers: Any politician with an (R) after their name.

And just one more…

CHEERS to U.S. Minty freshness. Here’s something coming out of Washington that won’t make us either dive for our fallout shelters or throw a brick at the TV: a preview of the first five “American Women” state quarters that’ll be released this year. The collection, which celebrates women from “a wide range of accomplishments and fields, including suffrage, civil rights, abolition, government, humanities, science, space, and the arts,” will start showing up a month from tomorrow. Here’s a sneak peak at this year’s lineup, whose designs were recently finalized. I think you’ll agree they’re quarterrrrrific:

C&J will keep you posted on their imminent arrival. It’ll give normal people time to learn more about these trailblazing women, and misogynists time to take their heart medication.

Have a nice Thursday. Floor’s open…What are you cheering and jeering about today?

Fox Business Network anchor Cheryl Casone was stunned by the just-released Cheers and Jeers readership report, which showed 807,000 new kiddie pool splashers added in December—more than double the forecast. “It was HUGE!”