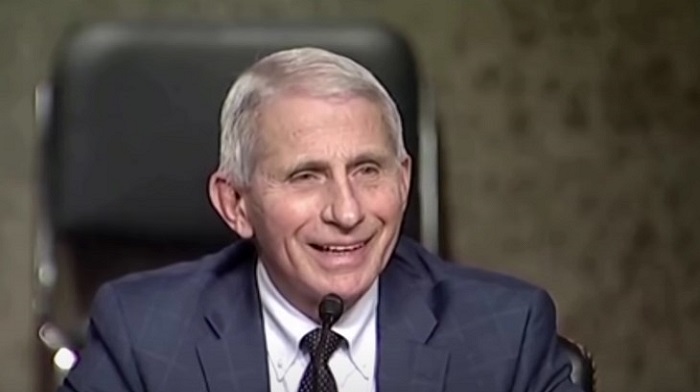 Republican Senator Roger Marshall responded to Doctor Anthony Fauci after the Biden administration’s infectious disease expert was caught on a hot mic calling him a “moron.”

Fauci called Marshall (R-KS) “a moron” during his testimony before the Senate Health Committee regarding the omicron variant of the coronavirus.

Marshall was prodding him about personal financial disclosures to Congress following reports that Fauci is the highest-paid federal employee.

A Forbes report indicated Fauci earned $434,312 in 2020 and “received a big pay hike for his biodefense research activities … to prevent future pandemics.”

Fauci insisted that his finance disclosures are public information, but Marshall suggested, without evidence, that ‘Big Tech’ was making it difficult to access.

“All you have to do is ask for it. You’re so misinformed, it’s extraordinary,” Fauci spat before the mic caught him muttering, “What a moron” and “Jesus Christ.”

— Dr. Fauci on a hot mic after a heated exchange with Sen. Roger Marshall (R-KS), who demanded one of Fauci’s financial disclosures (which Fauci insists is already public). pic.twitter.com/NtN6NDsomW

Senator Marshall fired back in a tweet featuring a clip of Fauci’s hot mic comments.

“Calling me a moron during a Senate hearing may have alleviated the stress of the least trusted bureaucrat in America, but it didn’t take away from the facts,” he tweeted.

“We need the truth Dr. Fauci!”

Calling me a moron during a Senate hearing may have alleviated the stress of the least trusted bureaucrat in America, but it didn’t take away from the facts. We need the truth Dr. Fauci! pic.twitter.com/GyfdppfNgn

“I understand that Anthony Fauci had a very frustrating day,” he said.

“Having a bombshell report show he in fact did award U.S. tax dollars for gain-of-function research at the Wuhan Institute of Virology and being called out about his personal financial disclosure during the COVID pandemic NOT being publicly available must be very frustrating.”

Earlier in the day, the House Oversight Committee Republicans released emails purportedly showing Fauci downplayed the lab leak theory and concealed information about COVID originating from a lab in Wuhan.

“I would not do anything about this right now,” he said in an email to then-National Institutes of Health Director Dr. Francis Collins, who referred to the lab leak theory as a conspiracy.

“It is a shiny object that will go away in times [sic],” Fauci replied.

In other testimony, Fauci went on the offensive against Senator Rand Paul blaming constant criticism of his work for personal attacks and death threats.

That’s right. Fauci whined to Paul (R-KY), a critic, but also a man who survived an assassination attempt on a softball field back in 2017, and was attacked by a deranged neighbor, about threats he’s receiving.

WATCH: Dr. Fauci talks about how a man was arrested for treating to kill him.

He blames it on Rand Paul having a “Fire Fauci” banner on his website, which he pulls out a printed copy of. pic.twitter.com/QbS0ov23eB

“To say that I’m responsible for death threats on him would be equivalent to myself or Steve Scalise saying that the Bernie Sanders supporter that shot us, that it was Bernie Sanders’ responsibility,” Paul said in an interview later that day.

He accused Fauci of “trying to deflect” by changing the subject.

The Senator says his ‘Fire Fauci’ donation link is indeed about politics. “If I win re-election, I’ll subpoena all his records and we will investigate whether or not the virus came from a lab in Wuhan… I’m very honest about that.” pic.twitter.com/5MWrCDDWQT

Paul, in an interview with Newsmax, said Fauci simply doesn’t want to answer questions about his salary.

The Republican Senator accused of “using government resources to center and to destroy the reputations of other scientists who disagree with him.”

Paul told Newsmax he believes Fauci “should be in jail” and if Republicans take over the Senate, they will “subpoena all his records.”