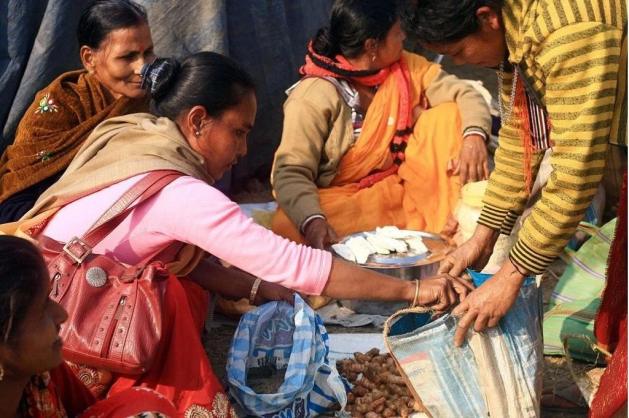 MUMBAI, India, Jan 12 (IPS) – When COVID-19 hit in early 2020, it affected every aspect of people’s lives. For many from the most marginalised sections of society, it meant loss of employment and lack of access to education, food, and the market, among other things.

Farmers in rural India were dealing with a peculiar problem. They had their produce, but since markets were shut during the lockdown there was no place to sell. Further, many bank branches were closed and ATMs were far away. With restrictions on travel, cash was practically out of reach, which curtailed people’s buying power.

Communities had to look for alternate modes of survival. One approach that some of them took was a return to the barter system—a solution they were familiar with. People bartered perishable goods such as vegetables, kirana stores in villages provided essentials in exchange for wheat, and food grains became a currency to pay children’s tuition fees. Those who did not have goods offered physical labour in exchange.

How did the transition happen?

Communities in rural India have been practising barter for centuries. In states such as Assam, where barter was extremely popular during the pandemic, it has been celebrated in the form of a fair called Jonbeel Mela for more than five centuries now.

Markets have evolved, and there have been many changes in the way business transactions work, but barter continues to thrive in the close-knit communities of the villages. This is because villages unlike cities are driven by producers as much as consumers and the rural societies survive on trust.

The close relationships that people share also allow for easier collectivisation and mobilisation. This was evident during the pandemic when people navigated various COVID-19 safety norms to meet individual and community needs.

Beauty Dutta Borah, a farmer and a grocery store owner in Kawoimari, Sivasagar district, Assam, says that during the pandemic she bartered not only goods, but also services such as getting people to reap and thresh the rice crop. “In most instances I had to just call out to a neighbour for this,” she explains. Dutta Borah adds that goods from various wholesale stores like hers moved across districts often in a single transport vehicle from the village. “A car goes from our village across Sivasagar district twice a week. It can be my car or anyone else’s from the locality. We collect goods from the various local stores and sell it to people at once,” she adds.

A resident of Chetti Thirukonam in Ariyalur district of Tamil Nadu, R Raja compares barter to debit and credit card payments that people in the cities use. He calls it an ‘older form of cashless payment’ that rural communities returned to.

New meanings of an old concept

Nonprofits working in the livelihoods sector in rural India are aware of this well-oiled barter machinery. This has allowed them to work with communities for their sustenance—especially in spaces where income alone is not enough for survival. However, since barter is a localised form of exchange, the organisations have also had to develop a nuanced understanding of cultural contexts and histories.

When Drishtee, a nonprofit that works with rural entrepreneurs, developed a mobile barter application during the pandemic, they chose Sivasagar district to start with. The nonprofit’s regional head of the Northeast, Paragdhar Konwar, said that it was a conscious decision considering the region’s history. “Sivasagar was the capital of the Ahom dynasty, which ruled Assam for six centuries. People here have followed the same age-old practices, including that of barter, for a long time now.”

As a result, there was pre-existing community knowledge waiting to be harvested. Konwar adds, “We told people that you will be continuing with the binimoy protha (exchange tradition) before explaining the renewed importance of barter during the pandemic.” The mobile application was used by people in Assam to exchange rice for oil and ducks for chicken eggs and to avail tractor-operated-rice-mill services when mills nearby were shutting down.

For Goonj, a nonprofit that works on community development, barter is core to their work, and a philosophy it embraced even before the pandemic. The names of its initiatives such as Vaapsi (giving back) and ideas such as ‘cloth for work’—aimed at building sustainable livelihoods—are borrowed from the cultural vocabulary of India. Thus, in times of crisis when Goonj mobilises people, it does so from a place of wanting to revive extant concepts rather than introducing jargon that communities might find difficult to comprehend.

Anshu Gupta, founder director at Goonj, says, “I believe we aren’t doing anything new. We are valuing what already exists. Village wisdom has always been valued in the villages, perhaps it wasn’t by people like us. We are just working with that community knowledge and recognising it.”

What does barter do for the communities?

Apart from facilitating hyperlocal markets during emergencies, barter also has other advantages for communities. Nonprofits using barter during the pandemic found that it was particularly popular among low-income households and women in rural India.

In cash-poor regions, barter helps people meet their needs locally—be it for immediate necessities, such as food grains, or a used smartphone. Additionally, barter is a viable way for local producers to sell their products. These are producers who cannot avail the benefits of e-commerce platforms or access urban markets, which are driven by large production volumes, standardised packaging, and homogenised aesthetics.

People have also used barter to work on community issues such as lack of water, sanitation, and infrastructure. Goonj, for instance, has used barter as a reward for labour. Villagers work on solving local problems on their own, and are rewarded in the form of goods that often travel from cities to them. Gupta says, “Typically people wait for access to a government scheme to address their local-level problems. Meanwhile, there are unused materials in the city, for which there is demand in villages.”

The nonprofit connects these two. Gupta adds, “Just imagine a situation: You give a person a shirt and the next day you say, ‘This is mine,’ he will say, ‘Yes, it is yours.’ But if a person is building a road or working on a water body for his village and you give him a shirt as a reward, he will say, ‘It might be yours, but I have earned it.’”

Barter opens up avenues for rural women who often do not have access to cash and markets. Satyan Mishra, co-founder and managing director at Drishtee, says, “Women who were earlier making things just for themselves saw barter as a big opportunity.” They started exchanging hand-made products for goods that they or their families wanted.

In Varanasi, women were found bartering hair for goods. Monixa Bordoloi, a resident of Dhekeria Gaon, Sonitpur district, Assam, asserts that she will continue to barter whether or not there is a pandemic. She says, “Women barter things they need, not what they already have.”

Despite the many innovative ways in which people have used barter, cash remains a necessity for many of people’s needs. For instance, while parents of students in Begusarai district, Bihar, have been able to use barter for their children’s education, they have not been able to pay their medical bills using the same method.

The world is therefore unlikely to shift overnight to a system of social exchange. Most aspects of our lives will continue to be defined by abstract monetary currencies. There will also be people’s aspirations that can only be met with money.

For this we will need jobs, job securities, equal opportunities for education, affordable health care, and more. But as many rural communities using barter confirm, it will coexist as a parallel economy embodying the many intangibles of a human society, such as trust, goodwill, and resistance.

Debojit Dutta is an editorial associate at India Development Review

This story was originally published by India Development Review (IDR)

Learn more about the related issues:

Bookmark or share this with others using some popular social bookmarking web sites:

Link to this page from your site/blog