Glenn Beck Says He Has COVID Again and It’s Hit His Lungs, but He’s Taking Ivermectin 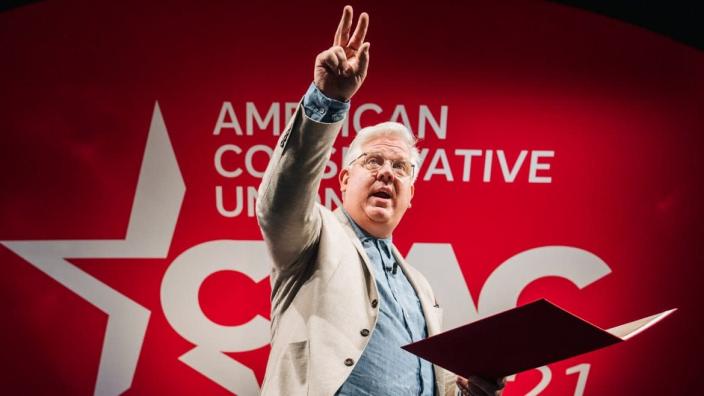 This time around, the former Fox News host turned mini conservative media mogul said Wednesday afternoon, the illness has progressed into his lungs.

“I am great, Mark. I am great, Mark,” Beck told fellow conservative radio Mark Levin during his daily radio program. “Despite having COVID and seeing the destruction of our country,” he added.

“Do you have COVID right now?” Levin asked.

“Ya, I do,” Beck fired back, adding, “it’s [COVID-19] starting to go into my lungs today and a little disturbing. I’m on all the medications and treatments and everything else, so.”

“It’s all good,” Beck said while letting out a deep cough.

Former President Donald Trump’s unpaid and unofficial hype man proceeded to ask Beck if he had begun taking a monoclonal antibody cocktail, which has shown to be somewhat effective on persistent COVID-19 cases. But with the new Omicron variant, the treatment has proven largely “ineffective.”

“No, the monoclonal doesn’t seem to be working for the new strain,” Beck responded before listing off a series of drugs, including ivermectin, which he has been consuming to hit the sickness “hard.”

“I have had it for about a week,” Beck continued while coughing. “I’m not going downhill. I mean, I think I’m feeling better. It’s just getting into my lungs… you will want to avoid that,” he said about the sickness progressing into his lower respiratory tract.

“Mark, I am not concerned about it. I’m really not,” the radio host claimed. “I just am so done with this whole COVID thing. I know it is real.

“I am a fatty-fat-fatso,” Beck concluded, “so that is probably not the best thing, and I got some other issues.”

Beck did not return The Daily Beast’s request for comment on Wednesday night.

Beck has not been vaccinated against the virus.

In mid-April 2021, Beck told Fox News host Tucker Carlson he had previously battled COVID-19. “I have already had it,” he said at the time. “Why do I need to be vaccinated again?”

Last week on Instagram, the conservative radio kingpin wrote: “My second covid test positive! Crap. So far, it is way different than the first time I had it in Dec ’20. That time it wiped me out for almost three weeks. This time it is just the worst ‘cold’ I have ever had.”

Got a tip? Send it to The Daily Beast here