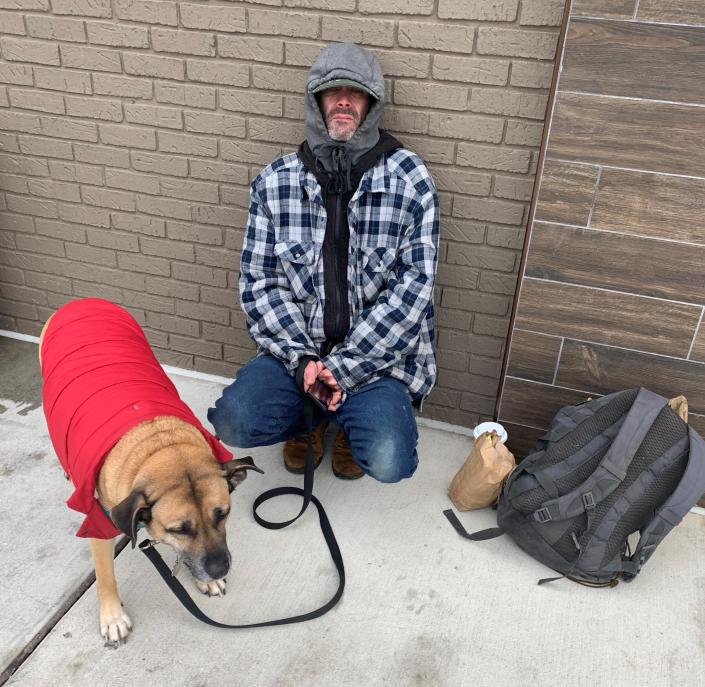 Susan McGrath was pulling into the McDonald’s drive-thru in the Bayville section of Berkeley Sunday morning when she spotted something that didn’t look right.

A man wearing a light flannel jacket was sitting out front, in the rain, with a dog.

“I ordered six breakfast sandwiches for him and the dog,” McGrath said. “I pulled around front, got out of the car, started talking to him, and he started to cry.”

McGrath, a 62-year-old mother of three U.S. servicemen and owner of two dogs herself — both canines were in the car with her that morning — gave the man the food, listened to his story, drove home and posted about the encounter on social media.

Helping the homeless: Lunch Break, Family Promise charities merge, and it could save homeless lives

A dog that ‘saved my life’

The man is Dustin Maggard, a 42-year-old who came to New Jersey two years ago from Florida. His 8-year-old dog is Surfer Baby, named in honor Dustin’s late fiancée Ashley Wilson, who died in a horrific car accident in 2014.

After Wilson’s Ford Focus was crushed under a tractor-trailer on a Florida Highway, Maggard fell into a deep depression. Friends gave him Surfer Baby, then a pup, to help him recover.

“She saved my life,” he said of the dog. “Losing my fiancée, it crushed me. I was drinking myself to death. I never would have survived. Now I couldn’t imagine my life without her (Surfer Baby).”

WATCH: Hear more from Dustin in the video atop this story.

That’s part of how he wound up sleeping on the ground behind a Bayville strip mall Saturday night. Maggard said he came to Berkeley in the summer of 2020 to be reunited with his teenage son and the boy’s mother. As confirmed by the Asbury Park Press, a domestic dispute led to his expulsion from their home Saturday. No criminal charges were filed, but a temporary restraining order was issued.

Maggard said Berkeley police tried to find him a place to spend the night, but none of the shelters they called would accommodate his dog. So he got some blankets from Fur Balls pet grooming and spent a freezing night next to a dumpster.

“There’s no way I’ll ever give her up,” Maggard said. “I was on the verge of hypothermia, but there was no way I was giving up this dog.”

How did it work out? Revisiting the Toms River family who took in six homeless siblings

Enter McGrath, who moved to Beachwood two years ago from Rahway, in Union County. She has a great feel for animals. One of her dogs was rescued by a son serving in Afghanistan with the New Jersey Army National Guard (he’s now a police officer in Rahway in charge of animal control).

After her initial encounter with Maggard and Surfer Baby, McGrath drove home and posted about them, with Dustin’s permission, on the “Beachwood Neighborhood Discussion & Watch” Facebook page. Then she drove back to the McDonald’s to help the pair find shelter.

“By the time I got back, cars were pulling up with coats (for Dustin),” she said. Two Beachwood residents, Tracy Carter and Melissa Reinertsen, were first on the scene.

McGrath called around and found a nearby Motel 6 where Maggard could stay with his dog.

“I drove him there and paid for four nights for them,” McGrath said.

A roof over his head: After 18 years in Toms River woods, homeless veteran finds a home

Then she updated her original Facebook post, which went viral. Strangers paid for four additional nights at the motel, through Jan. 16. Dozens of do-gooders showed up there, dropping off food, clothing and other goods until the stuff just about filled Maggard’s room. McGrath put up another post kindly asking people to stop — they’d run out of space.

“Susan has been amazing — what a godsend,” Maggard said. “The whole community came together. I am so happy and blessed.”

McGrath praised her fellow Beachwood residents — “they are great,” she said — and noted that offers to help poured in from around the state. People have offered to pay for additional motel stays as McGrath and Maggard try to figure out what’s next. And someone started a Paypal account for Maggard with $200 in it.

Maggard said a friend in Tennessee has offered to take him and Surfer Baby in. He just needs a way to get there. McGrath said they are exploring options.

Asked why she felt compelled to approach a stranger in the rain outside a McDonald’s, McGrath said she trusted her instincts — and once she heard Maggard’s story, she could empathize.

“I would never leave my dogs,” she said.

This article originally appeared on Asbury Park Press: Homeless man who wouldn’t give up his dog helped by Beachwood NJ woman