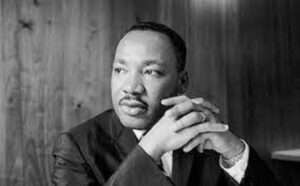 Today is Martin Luther King Day, an appropriate time to honor and examine King’s legacy. One of the things King was most famous for was his advocacy of civil disobedience, and – more generally – the idea that disobeying laws enacted by governments is sometimes justified.

Georgetown philosophy Prof. Jason Brennan, himself the author of an important book on the morality of resistance to government power, has a useful summary of King’s views on these issues. As Brennan points out, King believed that disobedience to unjust laws is often entirely justified, even the laws in question were enacted by democratic governments:

Many people assume that we almost always have a duty to obey the law, even unjust laws. King argued that unjust laws are no laws at all. Or, more precisely, he argued that if a law is unjust, there is no obligation to obey it and no right to enforce it.

He argued there could be all sorts of reasons why a law lacks legitimacy and authority. King denied that something evil could be rendered permissible if a democracy voted for it. He thought we had genuine rights and these rights are not created by government fiat or social agreement.

He also thought laws could lack legitimacy and authority because they were passed by an unfair procedure. For instance, many countries in Southern states were even majority Black, but only the white minority could vote.

I think King was right about this, and that, for many unjust laws, we have no obligation to obey. I outlined some of the reasons why in this 2014 piece about why most undocumented immigrants have no moral obligation to obey laws denying them the right to move to another country (see also follow-up post here). The same reasoning applies to many other unjust laws, at least those that inflict great harm on their victims.

Brennan is also right to note that, on King’s view, justified disobedience to unjust laws may not always require accepting punishment. He favored such acceptance, in some cases, for largely tactical reasons:

Let’s distinguish between two different kinds of reasons for accepting punishment. One reason could be that you deserve punishment for breaking an authoritative law. But, as King makes clear in his writings, he generally thought the laws he broke lacked authority. Breaking these laws was not merely permissible, but heroic and good.

So, a second possible reason to accept punishment is strategic; by accepting punishment, a person can engage in a public act of protest. They can show that they did not break the law out of convenience or criminal intent, but from concern for justice. Accepting punishment could also induce the public to sympathize with the victims of the law.

Sometimes, the goal of disobedience is not to effect a change in law (which, may, for political reasons, be impossible at the time), but simply to prevent injustice in that particular case. For example, many of the people who violated the Fugitive Slave Acts in the 19th century did not turn themselves into the authorities and accept punishment. And they were entirely justified in so doing. Accepting punishment would, among other things, have impeded their efforts to help escaped slaves. At least for a long time, they had little hope of getting Congress to repeal the Fugitive Slave Acts. But they could and did help individual slaves escape their reach.

At times, King seems to have endorsed a more categorical duty to accept punishment, as when he wrote that “One who breaks an unjust law must do so openly, lovingly, and with a willingness to accept the penalty.” But that was in the context of writing about civil disobedience intended  “to arouse the conscience of the community over its injustice” and thereby facilitate reform. In situations where such reform is impossible or highly unlikely, Brennan is right to suggest that King’s logic leads to the idea that refusal to accept punishment might well be justified.

Brennan also points out, contrary to much conventional wisdom, that King was not an advocate of absolute non-violence, but merely supported it as a strategy for the civil rights movement on tactical grounds:

King was not a pacifist. He believed violence in self-defense and in defense of others is permissible. He owned firearms for self-protection and even tried to get a concealed carry permit. And, as we saw, he needed those firearms because he received constant death threats and was in fact murdered.

King defended nonviolence on strategic grounds for the purpose of changing the law. He argued that if activists fought back against the police–even if they thought the police had it coming–by returning violence for violence, the public would probably side with the police and the government against the people. He thought the public would condemn the activists and their cause. In contrast, but refusing to fight back, the victims of injustice could win the public’s support and possibly even the sympathy (or “friendship,” King says) of those attacking them.

While King was not, on principle opposed to all violent resistance to injustice, it is important to emphasize that he did oppose violence targeting innocent civilians, including that caused by rioting. In 1968, he warned that “riots are socially destructive and self-defeating” and that, “[e]very time a riot develops, it helps George Wallace.” He opposed the riots of his own time on both moral and instrumental grounds. While we cannot know for sure, it seems likely he would have felt the same way about the last year’s riots in the wake of the brutal killing of George Floyd by Minneapolis police.

The obvious criticism of views like King’s is that many people may have poor judgment about which laws are unjust. For example, the people who stormed the Capitol on January 6, 2021 likely believed that enforcement of the laws against doing so would be unjust, because (in their view) Donald Trump had a right to stay in power. Similarly, terrorists often believe they are justified in violating laws against murder and assault.

But the risk that individual citizens may be mistaken about matters of justice has to be balanced against the danger that government can be wrong about such things, as well. Even in democratic societies, there is a long and awful history of the latter.  Throughout American history, many more people have been killed and oppressed by unjust exercises of government power than by individuals acting on mistaken assumptions about which laws are morally defensible. The toll of slavery and segregation (both imposed by law) alone easily outweighs that of all morally motivated private disobedience to law combined. The extent to which people should defer to the government’s judgment on questions of justice depends heavily on how good that judgment is. All too often, the answer is that it is, at best, highly unreliable.

Even when governments are acting unjustly, there should nonetheless – for reasons well-articulated by King’s critique of riots – be a very strong presumption against violent action that might harm innocents. But the threshold for defensible peaceful disobedience is much lower.

King’s views on the ethics of disobeying laws do not definitively settle the debate over this age-old question. Even a great historic icon like King was not infallible, and could be wrong on some issues. Still, his positions are well-worth exploring, and have obvious continuing relevance, even many years after his tragic death.

UPDATE: I have made a few additions to this post.

Doug Mastriano did not need Trump to lead him to conspiracy theories. He’s been there for 20 years