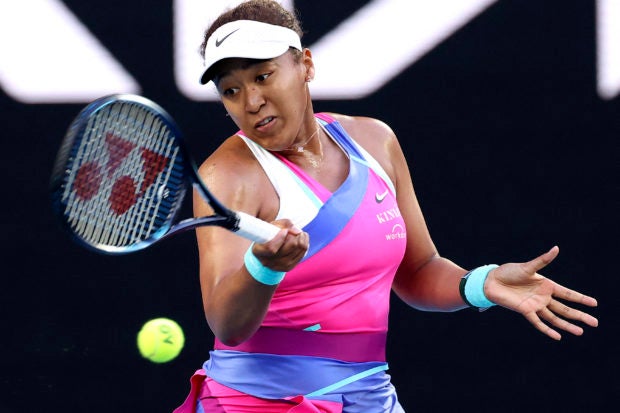 Japan’s Naomi Osaka hits a return against Madison Brengle of the US during the women’s singles match on day three of the Australian Open tennis tournament in Melbourne on January 19, 2022. (AFP)

MELBOURNE, Australia  – Top seed Ashleigh Barty and defending women’s champion Naomi Osaka can set up a mouth-watering last-16 clash as the Australian Open reaches the third round on Friday, with Rafael Nadal also in action as he targets a 21st Slam title.

World number one Barty, who has been in dominant form in 2022, faces the experienced Italian 30th seed Camila Giorgi to begin the night session on Rod Laver Arena.

Osaka, who won at Melbourne Park in 2019 and 2021, will simultaneously be playing Amanda Anisimova on the adjacent Margaret Court Arena.

Nadal faces dangerous Russian 28th seed Karen Khachanov in the late match, with the Spaniard warning that his best is still to come as he works his way back to peak form after an injury-hit 2021.

Barty, chasing a first title at her home Slam, has barely broken sweat so far, dropping only three games in two matches.

The Wimbledon champion won the warm-up Adelaide International with a serve that was untouchable, and it has been flawless so far in Melbourne as well.

“Just continually trying to make it a weapon,” she said of her serve, which has not been broken for 48 straight games stretching over five matches.

“I’m not the biggest girl out there, but I know I’ve got a sound technique and I know if I can get my rhythm right and use it effectively, it can be a weapon.”

Four-time Grand Slam champion Osaka says she has been taking unlikely inspiration during the first Slam of the year from maverick Australian Nick Kyrgios and Brit Andy Murray, who tweeted that he was enjoying watching her.

“Definitely means a lot. For me it was a really cool moment,” she said of Murray’s message.

Nadal’s path to become the first man to win 21 Grand Slams — he is tied on 20 with Roger Federer and Novak Djokovic who are both absent — could see him meet Olympic champion Alexander Zverev in the quarter-finals.

But first he needs to despatch Khachanov — with the prospect of another Russian, last year’s semi-finalist Aslan Karatsev, awaiting in the last 16.

“I think playing against Khachanov is going to be a big challenge,” said Nadal, who said he was not looking beyond Friday’s match.

“I never think that far. Just staying focused on my daily work, on what’s coming, and that’s it. One moment in time, that’s it.”

They will be followed by the French Open champion and fourth seed Barbora Krejcikova of the Czech Republic against Latvia’s Jelena Ostapenko.