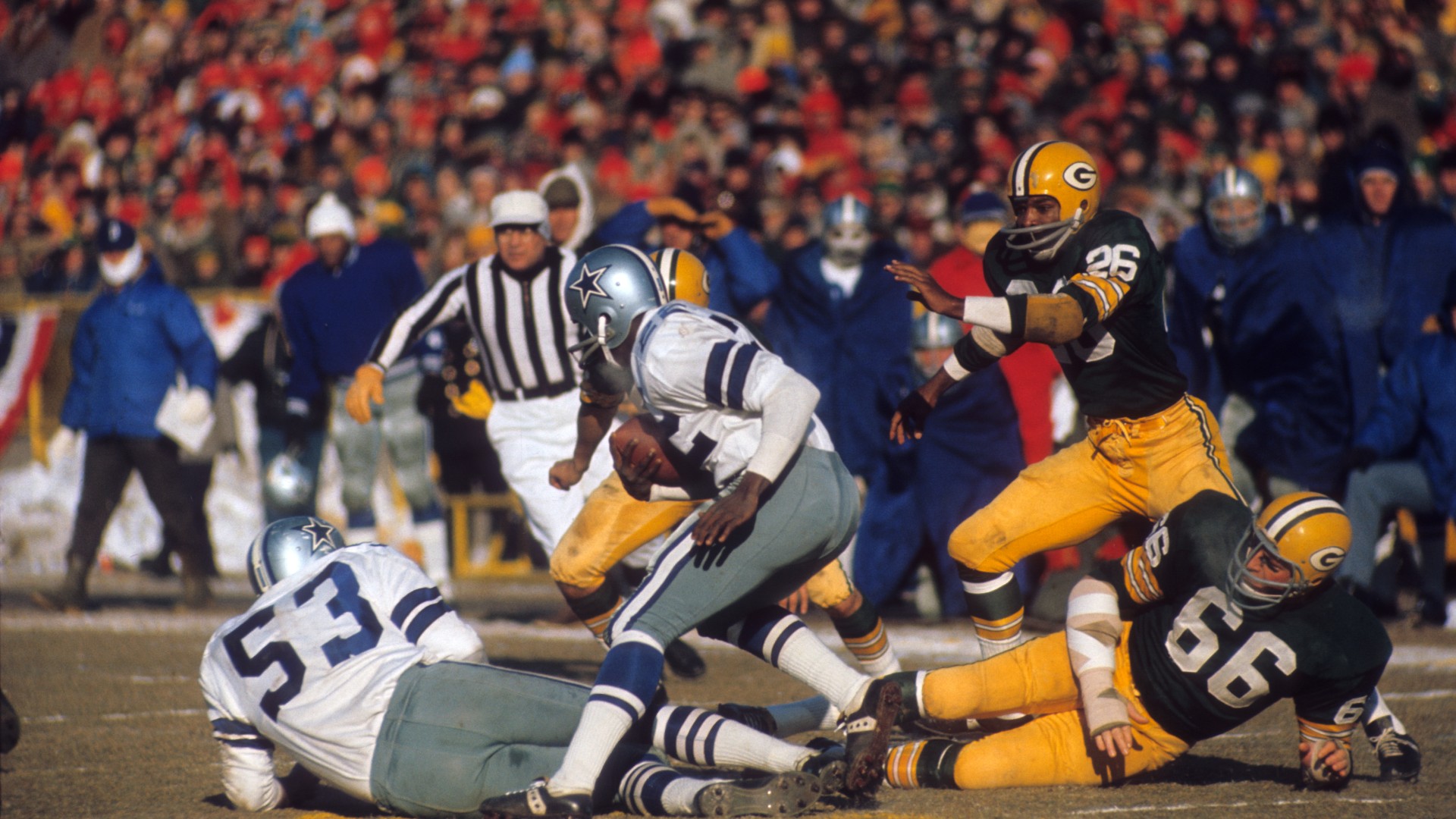 Green Bay is not a fun place to play in the playoffs.

Along with Lambeau Field being one of the most hostile road environments in the NFL, it is also one of the coldest in which to play, often delivering sub-zero temperatures with which opponents have to contend.

Saturday’s NFC divisional round matchup between the Packers and the 49ers will be no different, as the Weather Channel is expecting the temperature to dip down to 0 degrees Saturday night, just in time for 8:15 p.m. ET kickoff.

MORE: How cold is it at Lambeau Field?

What is the coldest game in NFL history?

There has never been a game that has approached the record for the coldest in NFL history.

“The Ice Bowl” earned its name for a reason, as the 1967 NFL Championship between the Cowboys and the Packers in Green Bay set the undisputed standard as the coldest game on record.

According to NFL Communications, the game-time temperature was 13 degrees below zero. That didn’t stop 50,861 people from attending the game, selling out Lambeau Field.

Moving the ball wasn’t easy for either team. Though the final score was 21-17, both teams finished with fewer than 200 total yards, with Green Bay — the winner of the game — racking up 195 yards to Dallas’ 192.

Green Bay’s next game was in much more favorable conditions. The Packers went on to Super Bowl II to face the Raiders in Miami, where the temperature was 60 degrees.

How cold was the coldest NFL game?

The thermometer at Lambeau Field would have said that it was minus-13, but it was even colder to those in the stadium.

NFL Communications reported that the wind chill was at minus-48 degrees, adding to the cold.

The report said that the playing surface was nearly frozen after a layer of condensation had formed between the tarp and the field, and that once the tarp was removed, the field froze. Packers running back Chuck Mercein said that Astroturf “was like a pillow” compared to the frozen tundra.

Where was the coldest NFL game ever played?

It should come as no surprise that the coldest game ever played was at Lambeau Field.

Green Bay has been home to not just the coldest game in NFL history, but several of the most frigid.

According to Stathead, the average temperature for playoff games at Lambeau Field is 21.8 degrees Fahrenheit. The warmest it has ever been for a playoff game was 35 degrees, when it hosted the Rams on Jan. 16, 2021. It is one of only two games played at the stadium in the playoffs that came in at a temperature above freezing.

Four of the games played there have either been in the single digits or in the negatives.

The Chargers were in for a rude awakening on their playoff trip to Cincinnati for the AFC Championship.

While back home in San Diego, the high was 70 degrees and the low was 56, according to Weather Underground, the Chargers had to contend with the brutally cold environment of Riverfront Stadium in Cincinnati.

The game was minus-9 degrees, with a wind chill of minus-32. In that cold, what was the league’s No. 1 offense in both points and yards froze, with San Diego scoring just one touchdown on 301 total yards with four turnovers. The Bengals were much more at home in the cold as they scored 27 points on 318 total yards with only one turnover to advance to the Super Bowl.

The Seahawks traveled to Minneapolis to face the Vikings at TCF Bank Stadium in an NFC wild-card matchup. The termperature was minus-6 degrees with a wind chill of minus-25.

But while Minnesota was more accustomed to the cold than the visiting Seahawks, there was no advantage displayed on the field. Both offenses were quiet, with Seattle mustering just 226 yards, while Minnesota could only gain 183. The Seahawks won 10-9 to advance to the next round, where they lost to the Panthers.

There are two NFL regular-season games that were below zero. Both were in Minnesota. Both in the same season. Both minus-2 degrees.

The first of the two games came in a Week 12 matchup against the NFC North rival Bears. With wind chill, the conditions were at minus-15 at Metropolitan Stadium.

Much of the offense for the two teams came via field goals, with the Vikings kicking three and the Bears kicking another as Minnesota edged out Chicago 23-10 to move to 7-5 on the season.

Another freezing afternoon in Minneapolis.

Once again the home of the Vikings played host to a freezing cold game. The temperature was minus-2 with wind chill of minus-19 the week after the Vikings endured another sub-zero matchup.

This week, they were unable to hold up against the Packers, who were coming off a cold game themselves, having beaten the Lions 33-7 in 13-degree weather at Lambeau Field. The Packers scored 23 unanswered points in the second half to run away from Minnesota 23-7. The Vikings had 144 yards of offense to Green Bay’s 270.

Only one more game in NFL history has been recorded as below zero, per Stathead, and that would be the 2008 NFC Championship.

Brett Favre’s final game in Green Bay was a cold sendoff as he had to contend with both the red-hot Giants and the minus-1 degree temperature and minus-23 wind chill.

Favre was held to just 236 passing yards and Green Bay amassed just 28 rushing yards, while the more balanced New York offense recorded 134 rushing yards and 251 passing yards from Eli Manning. The two teams went to overtime tied at 20, but the Giants won on a field goal from Lawrence Tynes, his third of the afternoon, to move on to the Super Bowl, where they beat the Patriots.

Talk about getting frozen out.

The Raiders traveled from sunny Los Angeles, where Weather Underground had reported it was 58 degrees at the time of kickoff against the Packers, to Lambeau Field, where it was 0 degrees with a wind chill of negative-20.

And the thermometer wasn’t the only zero on the board that day. The Raiders mustered just 182 yards with four turnovers and were held scoreless against the host Packers, who had 329 yards of offense and scored 28.

That wasn’t the last time the Raiders would face frigid temperatures that season, but the next time, they were better prepared.

Traveling to Buffalo, where it was 0 degrees with a wind chill of minus-14, the Raiders were clearly more ready for the elements in their AFC divisional round matchup. They scored two touchdowns in the second quarter to take a 17-13 halftime lead and took a 23-22 edge just before the fourth quarter.

However, the Bills took a late 29-23 lead on a 22-yard touchdown pass from Jim Kelly and would hold on to win by that score. The Bills only outgained the Raiders 355-325 in the matchup.

The AFC Championship at Riverfront takes the cake for the coldest game played in Cincinnati, but the Bengals have been host to several other notably cold matchups.

The next coldest was between Cincinnati and the rival Steelers at Riverfront Stadium back in 1977 in Week 13 of the regular season. The temperature was 0 degrees with a wind chill of minus-17.

In the battle between two future NFL MVPs, Ken Anderson claimed the edge against Terry Bradshaw, as his third-quarter touchdown pass put Cincinnati up 17-10, which would be the final score. Anderson had 303 passing yards, while Bradshaw had 246 with a pick-six.

Kansas City’s Arrowhead Stadium has also been known to deliver some of the league’s most frigid games, and Dec. 18, 1983, against the Broncos holds the Chiefs record for the coldest.

Those at the stadium endured the 1-degree temperature with wind chill of minus-19. And only the ones cheering on the hometown Chiefs left feeling warmed by victory.

Kansas City got off to a 21-0 lead in the first quarter and never took its foot off the gas, running away from Denver 48-17. John Elway threw four interceptions in the game, while the Chiefs saw both quarterback Bill Kenney and running back Theotis Brown score multiple touchdowns.

There aren’t many places that deliver cold weather as consistently as Green Bay, Wisconsin, in the NFL.

According to Stathead, the Packers are tied with the Bears for the most games — regular season and playoffs — with temperatures at 10 degrees or below with 12 such matchups. However, only Green Bay has had games with temperatures in the negatives.

Obviously the “Ice Bowl” once again takes the record for the coldest game here.

Here’s a rundown of the games played at Lambeau Field colder than 10 degrees, according to Stathead.

The Packers are a 6-5 in home games where the temperature is below 10 degrees. However, in home games below freezing, they are far more successful, boasting a collective record of 74-32.