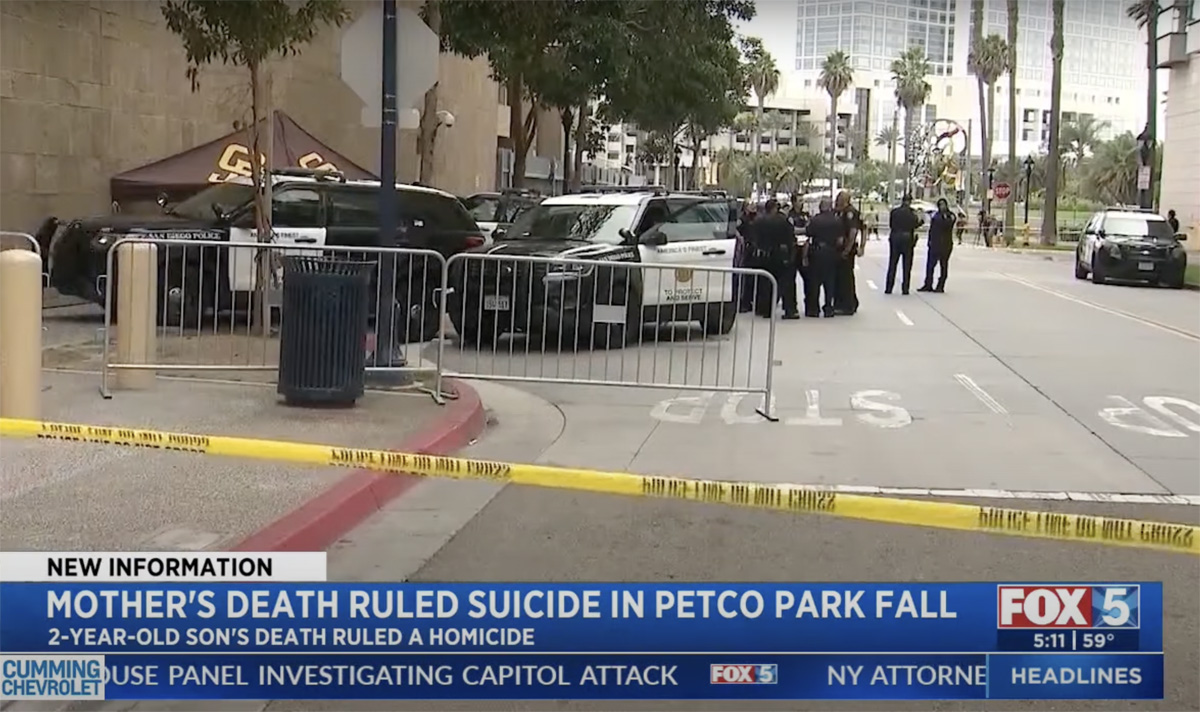 Police in San Diego believe they have discovered the reason why a woman and her 2-year-old son who fell to their deaths at a Major League Baseball game at Petco Park last season.

However, the attorney representing the deceased mom and baby’s family has come forward to strongly disagree with the police department’s findings.

As we reported back in September, a woman later identified as Raquel Wilkins and her 2-year-old son Denzel Browning-Wilkins both died after they apparently went over a railing and fell down three stories at a San Diego Padres game at the downtown San Diego baseball stadium.

Related: Louie Anderson Dead At 68 After Battle With Blood Cancer

Authorities considered the deaths highly “suspicious” at the time of the incident — and now, cops say they have made a determination. On Wednesday, San Diego PD Lieutenant Andra Brown released a statement to the news media revealing that they believe Wilkins and her son died in a horrific murder-suicide.

Brown explained, as reported by the San Diego Union-Tribune (below):

Now, it should be noted that at least one witness statement would appear to contradict the murder-suicide designation. Per the media report, one witness repeatedly described Wilkins as “happy” and “laughing” as she was jumping up and down on a picnic table moments before “she lost her balance and this time, fell over the edge.”

Attorney Dan Gilleon, who is representing Wilkins’ family, released his own statement to the newspaper alleging that this ruling is simply a way to protect the city — who owns a 70 percent stake in Petco Park — from legal liability.

“The city of San Diego owns that ballpark, it is legally responsible, assuming that what caused her to fall was anything but her intent. The only way the city is not at fault is if she intended to kill herself and her baby.”

In his argument, Gilleon pointed to a moment two days after the incident back in late September, when San Diego Mayor Todd Gloria appeared to blame Wilkins herself for the tragedy when he commented to local TV outlets “there is no need to harm a child” amid the tragedy.

Gloria later apologized to the family for that comment, but Gilleon seized on it again in his criticism this week:

“Four months later, the City’s police went to the media and said the Mayor was right.”

The attorney further criticized the city for the “extraordinarily dangerous and stupid” idea to place picnic tables right next to a waist-high railing.

In addition, the lawyer told the AP:

“The city doesn’t want to explain why it concluded that a young mother would kill her only child at an event where witnesses said she was happy. To me, the city is acting like any other defendant in a lawsuit: blame the victim, especially if they are not able to defend themselves.”

Here is more on the PD’s ruling and legal aftermath, from Fox 5 San Diego this week (below):

Such an unsettling and awful situation all around.

And to think of that family, and those grieving that poor mom and child. So sad…