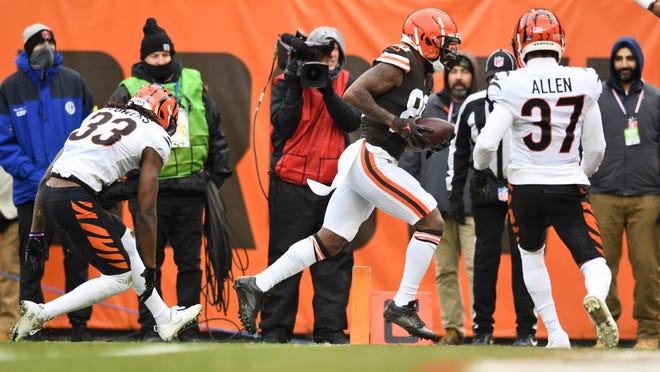 The door for Jarvis Landry’s return to the Browns has closed.

The five-time Pro Bowl wide receiver agreed to terms Friday with the New Orleans Saints on a one-year contract. Financial terms have yet to be disclosed.

Landry indicated on Twitter he is going to play for his hometown NFL team. He hails from Convent, Louisiana.

Two days before the official start of NFL free agency, the Browns released Landry on March 14 in a cost-saving move.

The Saints visit the Browns for a 1 p.m. game Christmas Eve.

Landry had been scheduled to make $15.1 million in salary and bonuses while carrying a salary-cap hit of $16.38 million in 2022, the final year of his contract with the Browns. Cutting him cost the franchise just $1.5 million in dead cap and saved them $14.879 million in cap space.

NFL Network’s Ian Rapoport said May 10 on “The Pat McAfee Show” the Browns offered Landry “a pretty nice one-year deal,” but he rejected the proposal.

On March 28, agent Roosevelt Barnes told the Beacon Journal there was “some mutual interest” between Landry and the Browns. Earlier in March, Landry switched from agent Damarius Bilbo to Jovan and Roosevelt Barnes. The change in representation didn’t lead Landry back to Cleveland, though.

Landry missed games due to injury last season for the first time in his football life.

He appeared in 12 of 17 games last season, sitting out four with a sprained medial collateral ligament in his left knee, plus other injuries, and one with COVID-19. He finished with career lows in catches (52 on 87 targets), receiving yards (570) and receiving touchdowns (two) to go along with six carries for 40 yards (6.7 average) and two TDs.

Landry’s MCL injury occurred Sept. 19 in Week 2 during a 31-21 win over the Houston Texans, the same game in which quarterback Baker Mayfield suffered a completely torn labrum in his left, non-throwing shoulder, which contributed to his poor individual performance in 2021 and was surgically repaired Jan. 19.

The Browns acquired quarterback Deshaun Watson in a controversial trade with the Texans on March 18.

On Feb. 22, Landry explained on Twitter he had told the Browns he wanted to return to the organization next season, but he was also prepared to help another NFL team win a championship if playing for Cleveland were no longer in the cards.

“Reality behind all this is I came back to play in the best shape of my life, I got hurt week 2 with a high grade MCL Sprain, Partial quad tear and bone bruise,” Landry tweeted at the time. “Then came back way to early and ended up staying hurt the entire season. You never heard me mention anything about it.”

The Browns acquired four-time Pro Bowl receiver Amari Cooper on March 12 in a trade with the Dallas Cowboys. Later the same day, the Browns granted Landry permission to seek a trade. In the end, Landry requested his release after he couldn’t reach an agreement on a restructured contract with the Browns and a trade didn’t materialize, a league source said.

The possibility of a reunion between Landry and the Browns remained alive for weeks, though it took a significant blow in the April 28-30 NFL Draft when General Manager Andrew Berry selected receiver David Bell out of Purdue University in the third round (No. 99 overall). The coaching staff envisions Bell playing primarily slot receiver, one of the roles Landry filled.

Landry, who will turn 30 in November, spent the past four seasons with the Browns, who named him their Walter Payton Man of the Year in 2019.

Former Browns GM John Dorsey acquired Landry in a 2018 trade with the Miami Dolphins, who drafted the player in the second round out of Louisiana State University in 2014. The Browns signed Landry to a five-year, $75.5 million contract extension in April 2018.

Nearly a year later, Landry’s close friend, former LSU teammate and fellow receiver Odell Beckham Jr. arrived in Cleveland via a trade with the New York Giants. Beckham forced his exit from the Browns in early November and went on to win Super Bowl LVI with the Los Angeles Rams on Feb. 13. Landry publicly rooted for Beckham.

After Beckham left during a chaotic stretch in which his father disparaged Mayfield’s performance with an Instagram video, Landry avoided speaking to beat writers in a Browns setting. His lone interview the rest of the season took place Nov. 16, when he hosted the second annual Jarvis Landry Thanksgiving food drive at Parma Senior High School and said Beckham’s divorce from the Browns “hurt” and “stung.”

In eight NFL seasons, Landry has started 113 of the 123 regular-season games in which he has appeared and compiled 688 catches on 1,045 targets for 7,598 yards and 37 touchdowns to go along with 40 carries for 239 yards and five touchdowns.

Now Landry is a member of the Saints. Like Landry, Beckham is a free agent who won’t be back with the Browns despite occasional speculation to the contrary.