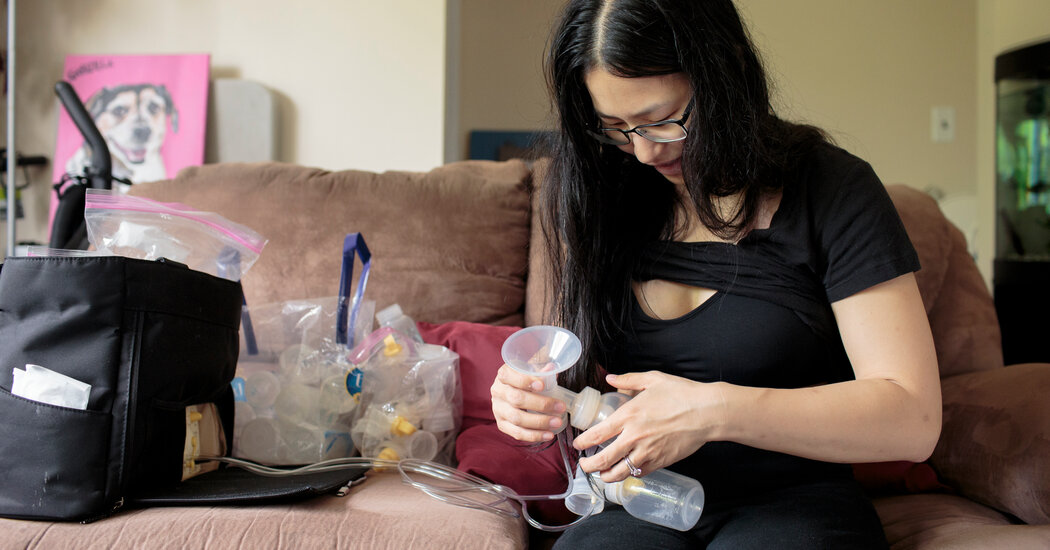 In recent weeks, milk requests have also grown — by about 20 percent, Ms. Harelick said. Some parents just want a few bottles to get them through the stressful first days before their milk fully comes in, while others are seeking months’ worth, if it’s available.

But buying milk from the bank is very expensive, underscoring one of the many ways the formula shortage has been tougher on lower-income mothers.

Without medical insurance, which in New York State usually only pays for breast milk for hospitalized babies, the milk costs $4.50 an ounce, to cover the bank’s operations, Ms. Harelick said. A newborn may drink between one and 12 ounces of milk a day in the first week of life, while a 6-month-old typically drinks at least 24 ounces a day.

Navigating the Baby Formula Shortage in the U.S.

A growing problem. A nationwide shortage of baby formula — triggered in part by supply-chain issues and worsened by a recall by the baby food manufacturer Abbott Nutrition — has left parents confused and concerned. Here are some ways to manage this uncertainty:

Finding formula. If your baby’s formula was not affected by the recall, but is still not available, you can try calling local stores to ask when they expect to get it back in stock. You may also be able to buy it online. If your baby is on special formula, reach out to your doctor’s office: They might have samples in stock.

Picking a new formula. If you typically use a name-brand formula, look for its generic version. Alternatively, seek a new formula that matches the ingredients listed in your usual one. If your baby is on a special formula for health reasons, check with your pediatrician before switching.

Transitioning to a new product. Ideally, you will want to switch your child gradually. Start by mixing three quarters of your usual formula with one quarter of the new one and gradually phase out the old product. If you can’t transition gradually because you’ve run out of your usual formula, that’s OK, although you might notice more gassiness or fussiness during the transition.

What not to do. If you can’t find your baby’s usual formula, don’t make your own — homemade formulas are often nutritionally inadequate and at risk of contamination. Don’t try to “stretch” your formula by adding extra water, and don’t buy it from unvetted online marketplaces like Craigslist. For a baby less than 1 year old, don’t use toddler formula.

In New York, a doctor’s prescription is officially required to buy breast milk privately, with a wide range of diagnoses that qualify, including health complications, low milk supply, adoption and infant allergies.

Mothers have been spreading the word about the milk bank. Lucie Fink, a 29-year-old mother and social media content producer who lives in Manhattan, recently donated 150 ounces of her milk to the bank and made a TikTok video to show how easy donation was. It has already gotten nearly a million views, with commenters from around the country thanking her.

Chelsey Baranek, 33, who is in the process of getting certified to donate to the bank, said that once she gives her initial 100 ounces, the minimum donation, she plans to continue pumping to give more to help. She lives in East Islip, Long Island, and her daughter, Anna, is 7 months old.

“Just as long as I’m feeding her, and I have extra supply to do so, I would love to be able to contribute to the cause,” she said, adding that she hopes she will have about four ounces a day to donate.