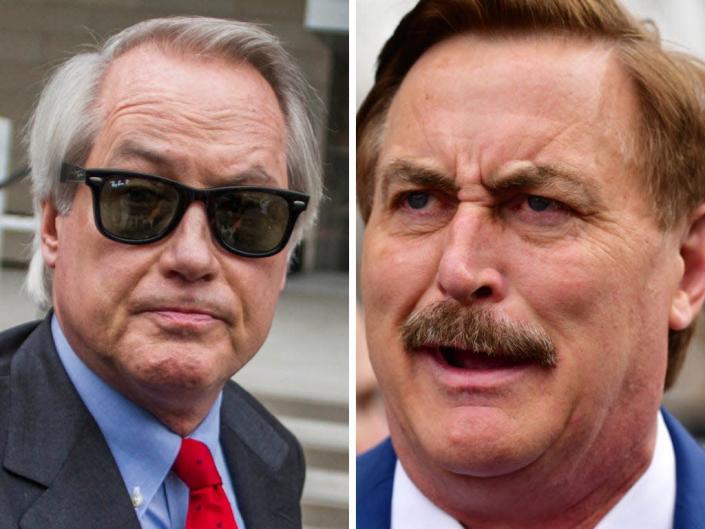 A series of Telegram posts by Lin Wood, a pro-Trump lawyer, appears to indicate that the MAGAverse may be fracturing from within.

On Wednesday, Wood laid into Mike Lindell, the CEO of MyPillow, and John Sabal, a QAnon influencer also known as “QAnon John,” on his official Telegram channel. QAnon is a baseless conspiracy theory that claims former President Donald Trump is fighting a cabal of satanic pedophiles.

Lindell, Wood, and Sabal were previously thought to be part of an alliance of public figures who believe the baseless conspiracy theory that the 2020 election was stolen from Trump.

In a Telegram post, Wood suggested that the MAGA movement was being compromised by “deep state operatives” disguised as “patriots” who were actually “communist infiltrators.”

“Mike Lindell. Patriot or traitor? You decide,” Wood wrote. “Do the research. Connect the dots. Draw your own conclusions.”

“I have drawn mine. I know this: God does not lie. And god never overpromises and under-delivers,” Wood added.

He then shared a lengthy message from one of his followers, which posited that Lindell could be associated with Antifa.

The post shared by Wood also claimed, without substantiation, that Lindell once offered a 66.6% discount on his pillows, implying that the pillow salesman had links to Satanism. The number 666 is sometimes used in popular culture to refer to “the mark of the beast,” a Satanic symbol.

Some of Wood’s followers also chimed in, criticizing the pillow CEO.

“I ordered a pillow from him awhile ago and that’s the first thing I thought when I saw his enclosed 66% off coupon inside of the package. Out of all the available numbers he could have used and he chose 66%,” read a post by one of Wood’s followers.

Wood also attacked Sabal, telling his followers to “watch out” for the latter.

“I have had my eyes on Ol’ QAnon John from the very beginning. He thought he was playing me. I was playing him to expose him as a FAKE Patriot,” Wood wrote.

The Trump-allied lawyer also appealed to Sabal to “confess and repent.” “I pray for you, John. I don’t want anyone to spend eternity in hell,” Wood wrote.

Also mentioned in Wood’s posts were other conservative figures like former Attorney General William Barr and Trump-era special counsel John Durham. Wood asked his followers to consider whether they were “patriots or traitors.”

Sabal has hit back at Wood, sarcastically quipping that he was “feeling the love” from the lawyer.

“I get be to placed with Mike Lindell too, another one of the GREATEST Patriots this country has ever seen! On top of Bill Barr and John Durham?!?!” he said in a message to Wood that the latter re-posted. “I gotta say … I am beyond words, Lin.”

In December, Wood went after Rep. Marjorie Taylor Greene, calling her a pawn of the devil and representative of the deep state. The month before, Wood stirred drama in the QAnon universe when he accused “Stop the Steal,” a group of fellow Trump allies, of being a deep-state campaign.

Wood was also one of the right-wing figures who laid into Texas Sen. Ted Cruz in January, calling him “stupid” for suggesting that the January 6 Capitol riot was a violent attack.

Lindell and Woods did not immediately respond to requests for comments from Insider.