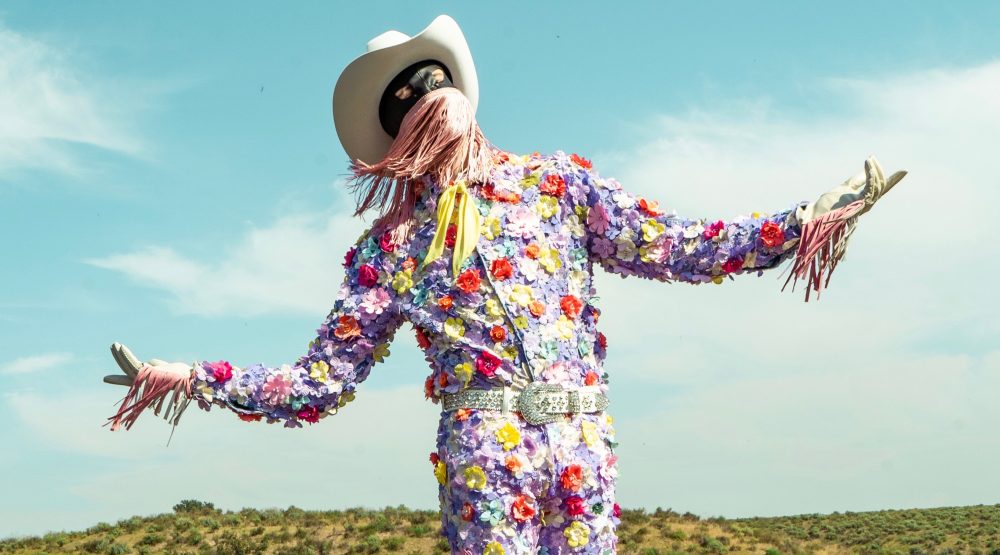 Orville Peck grew up in South Africa before moving to Toronto with his family when he was 15. A theater kid and a trained ballet dancer, he eventually headed to London and appeared in a play in the West End. But his acting career was short-lived because his true passion was making music — country music.

“All I ever wanted to do was be a country singer,” Peck says. “I finally got the courage when I was in my 20s to put all of the things I love together and just do the dang thing.”

That included taking extreme measures to obscure his identity. He’s far from the first entertainer to adopt a stage name, but not many have gone the extra mile and masked up — pre-COVID — in every moment of their public lives. Peck’s collection of about 60 masks range from a rainbow assortment of brightly colored, bedazzled numbers to hard black leather pieces that would make the Village People blush. Of course, these steps don’t stand in the way of internet sleuths trying to discover his true identity, based on his early career in punk rock and his tattoos (he has more than 30). But Peck tells people to listen to his music if they really want to get to know him.

His voice conveys its own sense of classic mystery: Peck croons with a deep, soulful sound that’s been compared to Elvis Presley, Roy Orbison and Chris Isaak.

Peck, who is on a worldwide tour in support of his second album, “Bronco,” is also openly gay. And that’s one thing he never felt the need to mask.

“I’ve been out since I was little,” he says during a Zoom interview from the basement of Santa Barbara’s Arlington Theatre, a stop along the tour. “I was very lucky to grow up in a family environment where I was very protected and loved for whoever I was going to be.”

Like any good country artist, Peck writes about heartache. He sings for lost loves and men who have done him wrong. In fact, much of “Bronco” was inspired by a relationship that ended just before the pandemic. “I was very depressed and felt uninspired,” Peck explains. “So I forced myself to go into the studio every day for six to eight hours and work on new music.”

His music videos are celebrations of LGBTQ pride, all the way up to appearances by “RuPaul’s Drag Race” stars. The video for “The Curse of the Blackened Eye” features “Walking Dead” actor Norman Reedus as his possible lover.

Peck and “RuPaul’s” country queen Trixie Mattel teamed up last year for a cover of Johnny Cash and June Carter Cash’s classic duet “Jackson.” “Orville and I do this type of music because it’s the type of music we like and listen to and grew up wanting to be a part of,” Mattel says. “We’re coming at it authentically, which makes it hard to reject because when you listen to either of our music, you can tell we’re here because we love it, not because it’s the easiest genre to pick from.”

Peck traces his country roots to his grandfather, a horseback sheriff in South Africa’s KwaZulu-Natal province, who may have been tough on the outside but also was a big softie. He describes his father as “a very free-spirited, open man who’s always been extremely sensitive and taught me about sensitivity and kindness. My brothers, who are straight, also learned a lot of sensitivity from that lineage of my family. And I just always had this kind of admiration and sort of obsession with cowboys. I saw them as these outwardly facing strong figures, but inwardly they were really sensitive and sort of heartbroken and maybe lonely. I started to fall in love with the idea that these characters were outsiders and they were lonely, but that was their power and their strength, rather than their weakness.”

Although he may be seen as an outsider artist, Peck established his love for mainstream country in 2020 when he dueted with country-pop superstar Shania Twain on “Legends Never Die,” which appears on his “Show Pony” EP. “To me, Orville’s voice has a familiar, throwback sound from a few early country male artists of my youth. There’s something very rich about his voice that makes you want to hear more,” Twain says. “The fact that he is sweet, kind and genuine as a person makes him likeable and easy and be around.

“Country music fans want to know the artists they love. They want to feel the artists sincerity when they sing,” she continues. “The country music I grew up listening to was a much more raw story telling kind of Country. The artists had grit to their lives and the stories they wrote for the music they sang reflected that grit. There was also a wider range of vocal styles on the radio at any one time. I think the Country audience is desperate for more variety and distinction between artist styles. When you hear Orville Peck sing his first word of any song, there is no question that it’s Orville Peck.  Being able to identify an artist instantly is exciting for listeners and keeps them engaged. Orville deserves to shine in country music for many reasons. But his unique singing style and less predictable lyrics make him a stand-out artist.”

And standing out loud and proud has become more important to him than ever. “I started to receive a lot of messages and letters from gay and trans and queer fans,” Peck says. “They would send me really beautiful, heartfelt messages saying, ‘I live in Arkansas,’ or ‘My father was a famous rodeo star.’ They would say, ‘I grew up with country music all around me, but it wasn’t until I listened to you that I felt like I could embrace that side of my culture because I felt really outside of it growing up.’ That is what makes me feel really good about my visibility. It is a big focus of mine mostly because I now know how important it is to people who maybe didn’t have the same experience that I had.”

While crashing the country music scene wasn’t as simple as rolling out a rainbow carpet in front of Ryman Auditorium in Nashville, Peck insists it hasn’t been as difficult as one might assume. “I have definitely received my fair share of reluctance, skepticism and aggression because I’m a gay man in the country world,” he says. “But I would say that it’s far less than I think people would maybe imagine. I play shows and festivals like Coachella, but we also play true-blue country festivals, the kind in red states with people that are wearing ‘Blue Lives Matter’ shirts and Trump hats. I go in with an open heart and open mind. A lot of times the people in the audience who I’m nervous aren’t going to accept me are dancing and singing along by the end of the show. I think the important thing that’s happening in country music at the moment is there’s so many more queer people and people that aren’t just white straight men making country music.”

The past few years have seen significant lavender-hued strides in the genre. Artists like Chely Wright, Ty Herndon and Billy Gilman came out, albeit years after peaking as ’90s hitmakers. Singer-songwriter Brandi Carlile, who established herself as an Americana artist, has practically become a country star with her frequent collaborations in that world. And in a rare instance of a star coming out while still clocking in as a major headliner, T.J. Osborne of Brothers Osborne opened up about his sexuality with Time magazine in 2021.

“We’ve always been there, but a lot of us are now more kind of in the mainstream,” Peck says. “It’s just a matter of time that that slowly chips away at the belief systems that some of these country fans have in place, these kind of maybe bigoted ideas. I think if we keep our heads held high and we keep together and we keep doing what we’re doing and being authentic, I like to believe that it will hopefully not only change the landscape of country music, but it’ll also help change the cycle of racism and homophobia.”

Last August, Peck played the Hinterland Music Festival in St. Charles, Iowa. He stood onstage in a red-and-white ensemble that would have made Elvis proud or help a queen win a “Power of the Dog” challenge on “RuPaul’s Drag Race.” There, he performed Lady Gaga’s 2011 hit “Born This Way,” the same cover he contributed to the 10th-anniversary rerelease of Gaga’s album of the same name, all of whose tracks were reimagined by mainly LGBTQ artists. “This song is just about being yourself, which sounds really easy, but it’s hard to do,” Peck told the crowd. “And it took me a long time to figure out how to be myself.”

He added with a chuckle, “It looks like this now.” The crowd roared with applause.

“I think the future is so bright for Orville,” says openly gay CMT host Cody Alan. Which suggests the future is bright for other queer country musicians. “One step leads to another, and we’re going to have more country artists who are out as queer from day one,” Alan says.

For now, Peck is on the road through mid-August (including a prominent spot at Goldenvoice’s Palomino Festival in Pasadena in July, which will make him the only artist this year to play that, Stagecoach and Coachella). To answer the inevitable question, he doesn’t know if or when he’ll stop wearing his masks. But he does reveal that he’s already working on a third album.

“I have written one song for it,” he says, smiling. “It’s the first love song I’ve ever written. I’ve never written about being in love. I’ve only ever written Julia Johnson/Sony Music about heartbreak.”