Italy among teams to get new jersey with floral design 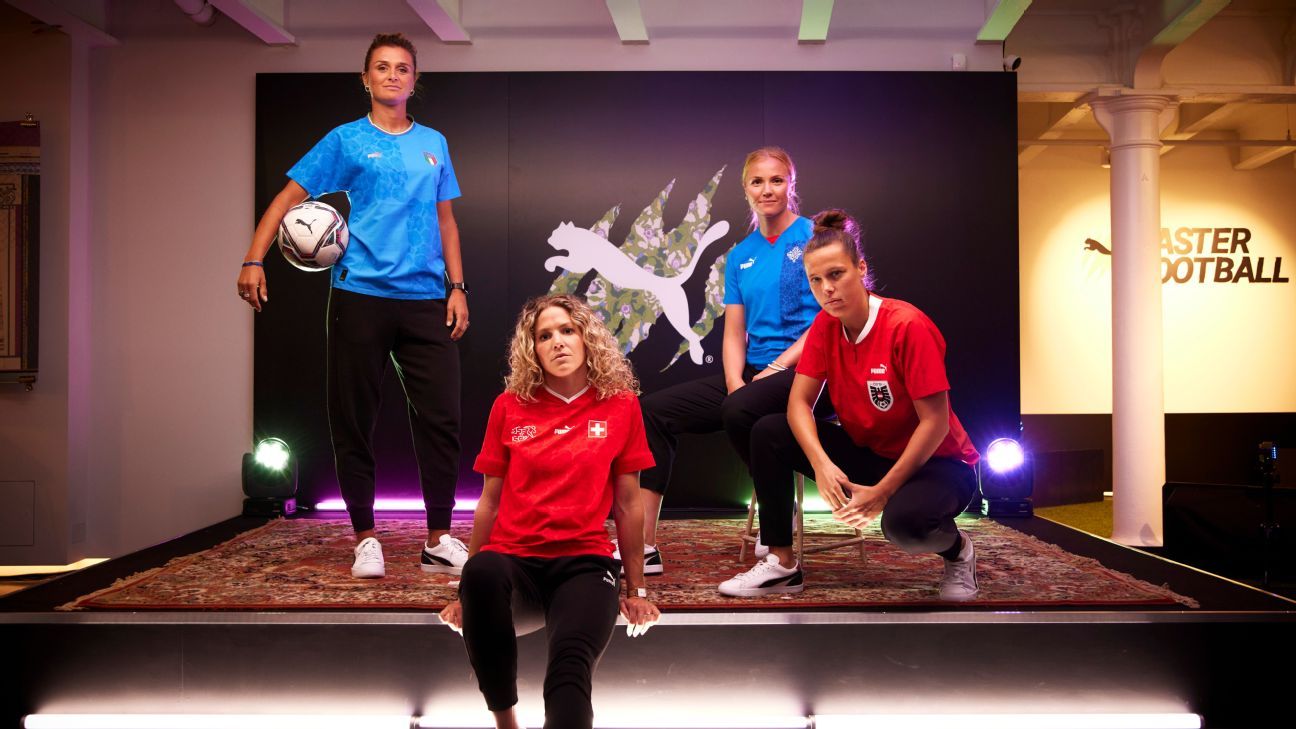 Puma has released a collection of new home kits that will be worn with pride by Italy, Iceland, Austria and Switzerland at the upcoming 2022 UEFA Women’s European Championship, which kicks off next month.
2 Related

Following on from Adidas unveiling jerseys for teams including Germany and Spain last month, and Nike revealing uniforms for England, France and Netherlands last week, now Puma takes it turn ahead of the big kick-off on July 6.

For the launch, the kit manufacturer joined forces with luxury retail brand Liberty to create a series of bespoke designs for each nation. Each kit also carries a custom graphic that was hand-drawn by artists at Liberty’s design studio, which is famed for its colourful prints and elegant floral motifs.

Puma and Liberty also collaborated on the designs for two sets of football boots specifically designed for female athletes.

The four kits were first unveiled as a special launch event in London, the city which will host the final of the Women’s Euros at Wembley on July 31.

Italy will play in a jersey with an unorthodox checkerboard pattern that sets their iconic Azzuri blue against tonal blocks of dusky hand-drawn roses. The red, green and white of the Italian national flag is represented on a slim tricolor collar, complementing the modernised Italian Football Federation (FIGC) badge — which was introduced in October — on the chest.

The Iceland kit is similar to that worn by the men’s team in that it consists of a simple blue base accented by a wide stripe in a darker blue that runs down from the national crest, as well as a triangular red collar tab. The key difference, however, is that the stripe is not a solid block of colour and rather made up of the Liberty floral print that is found across Puma’s designs for its Women’s Euros kits.

Austria’s bright red jersey has subtle hoops worked into the design that are created using wide bands of the Liberty rose print. A contrasting, oversized Austrian Football Federation (OFB) badge helps to complete the look with the manufacturer’s marque also switched from the right-hand side of the chest in order to sit above the crest.

The Swiss jersey appears to be covered in a mottled, camouflage-style pattern but, on closer inspection, the darker red blotches are made up of the Liberty flower design. A simple white V-neck collar provides contrast, along with the two badges always found on Swiss national team kits — those of the country’s football association and that of its national flag.

As well as producing bespoke kits for four nations at the 2022 Women’s Euros, Puma has also created two special editions of boots that have been specifically designed to be worn by female players for the tournament.

Both gleaming in pristine white, the Puma Future and Puma Ultra Ultimate boots have been gilded with the bespoke Liberty rose design, which can be found wrapped around the heel panel.

The demand for soccer footwear and apparel made specifically for women has increased in recent years, with research showing that female players run the risk of sustaining a variety of lower-limb injuries by playing in boots that were primarily designed to fit men’s feet.

Now, sports manufacturers have started to recognise the need to develop and produce kit — from jerseys to footwear to training apparel — that is explicitly designed with the needs of female athletes in mind.

“Women’s football has always been a priority for Puma,” said Marco Mueller, head of product line team-sport management for the German brand. “For this summer’s major tournament we have collaborated with Liberty to produce bespoke kit for our female athletes to be worn on the biggest stage.”