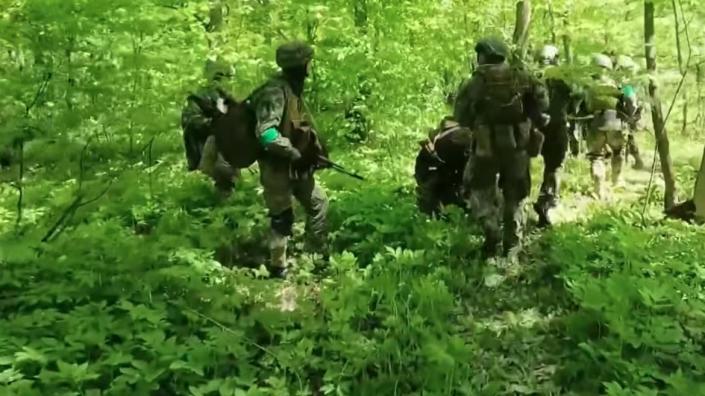 Russia’s National Guard has confirmed that a Chechen commander was killed in a bloody firefight with foreign volunteers in Ukraine—and they singled out the son of a British lawmaker as one of those responsible.

Ben Grant, a 30-year-old former Royal Marine and the son of Helen Grant, a Conservative MP and Prime Minister Boris Johnson’s special envoy on girls’ education, joined British and U.S. servicemen fighting Russian forces in Ukraine back in March, telling British media at the time that he felt compelled to act after seeing footage of Russian troops bombing a home as a child screamed.

“I just want to make that clear, completely off my own back, I decided to do this. I didn’t even tell my mum, but it is what it is,” he said.

Viral footage of fighting in the Kharkiv region published by The Daily Telegraph last week captured Grant and other Western volunteers, part of a Ukrainian counteroffensive to force Russian troops out of the region, under heavy Russian fire as they rescued a wounded fellow volunteer.

“We’ve got to move now or we’re gonna die!” Grant can be heard shouting.

The harrowing video, filmed by a helmet-mounted camera, then shows as they turned the tables to ambush a Russian armored vehicle, striking it with a shoulder-mounted rocket launcher.

“Shoot it now!” a man identified as Grant yells as the weapon is fired.

Russia’s National Guard says Sgt. Adam Bisultanov, the commander of a separate operational brigade of the North Caucasus District of the National Guard, was killed in the “attack” on Russian forces by the “group of mercenaries from Great Britain and the U.S.”

“During protective fire, the armored personnel carrier in which [Bisultanov] was located took three hits from a grenade launcher and was wrecked,” the National Guard said in a statement Tuesday.

“The GoPro camera captured footage of the attack and one of the fighters of the mercenary group, the son of British MP Ben Grant,” the statement said, adding that the video will be provided to military investigators. Russia’s Investigative Committee announced this week that it was investigating Grant for his role “leading” the ambush.

Bisultanov had taken part in the war in Ukraine since Vladimir Putin launched an all-out invasion on Feb. 24. In light of his death and news of Grant’s alleged role in it, some Russian media reports floated the idea of him facing the “death penalty” in Russian-occupied Donetsk.

“He will have to run for the rest of his life,” Komsomolskaya Pravda wrote of Grant, noting that Bisultanov had been born in Chechnya, “where the principle of blood feud or vendetta is not empty words.”