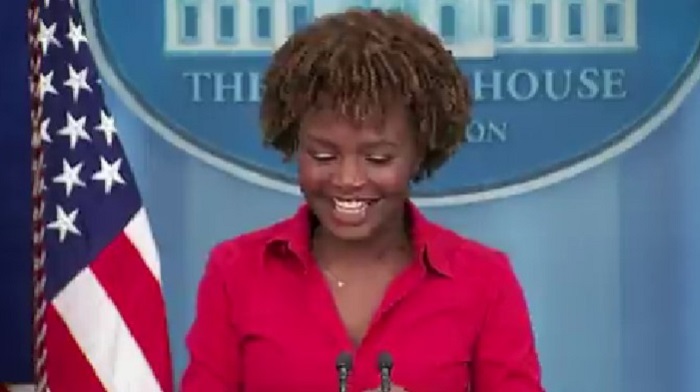 When pressed to admit the Biden administration was wrong about the threat posed by soaring inflation rates, White House press secretary Karine Jean-Pierre insisted that the President’s economic plan “is working.”

Fox News correspondent Peter Doocy asked Jean-Pierre point-blank at a press briefing Wednesday: “When are you guys going to admit you were wrong about inflation?”

He referenced the fact that Treasury Secretary Janet Yellen recently admitted to being wrong about inflationary concerns that she had predicted would be a “small risk.”

“The Treasury Secretary says that she was wrong, so why doesn’t anybody here at the White House?” Doocy asked.

“I think I was wrong then about the path that inflation would take,” said U.S. Treasury Secretary Janet Yellen about her past predictions that inflation would be “a small risk” and “manageable.”@Bruce_LeVell reacted on Wednesday’s “National Report.” pic.twitter.com/ynsQH0PKF3

RELATED: NYT Reporter Says All Her Friends Wish They ‘Could Raise Their Children Outside America’

If Doocy thought Karine Jean-Pierre would follow with an admission they were wrong about inflation, he was sorely mistaken.

Jean-Pierre referenced Yellen’s defense that “unanticipated and large shocks to the economy” are what caused her original assessment to be so off course.

She went on to insist that “the president’s economic plan, as we see it, is working.”

🚨Doocy: “When are you guys going to admit you were wrong about inflation?”

Jean-Pierre: “The president’s economic plan, as we see it, is working.” pic.twitter.com/1kqCmiUBTh

“Just that I understand,” a flabbergasted Doocy continued. “The treasury secretary says that she was wrong, but the White House was not wrong about inflation?”

Jean-Pierre replied that “those are your words, not my words.”

Q: “When are you guys gonna admit that you were wrong about inflation?”

Not Up to the Job

In the same conversation with reporters, described by the Daily Mail as a “car crash briefing” in which Karine Jean-Pierre “struggled” to answer questions, the press secretary said she had no idea why President Biden didn’t know about the baby formula crisis even as others had known much earlier.

Biden had told reporters, minutes before Jean-Pierre’s press briefing, he was first informed of the baby formula shortage in “early April,” two months after several CEOs said they had gotten word of the shortage and knew it would be “a very serious event.”

“I was in my office. I did not actually hear what the president said. I do not like to speak on something without having a conversation with the president first,” Jean-Pierre deflected.

She later insisted, “We have been working on this [the baby formula shortgae] since the recall in February.”

How one can work on a problem the President didn’t know about at the time is anybody’s guess.

Reporter: “When was someone called here at the White House and say the [baby formula shortage] is a problem?”

Jean-Pierre: “I don’t have a timeline on that. All I can tell you, as a whole of government approach, we have been working on this since February.” pic.twitter.com/AoPoV7P8b5

Doocy, meanwhile, has consistently pressed Karine Jean-Pierre on the topic of inflation.

“In some places in this country now, a gallon of gas costs more than the people on the federal minimum wage are making in an hour,” he explained. “What does the White House want these people to do? Just stop driving to work?”

Doocy: “In some places in this country now, a gallon of gas costs more than the people on the federal minimum wage are making in an hour. What does the WH want these people supposed to do? Just stop driving to work?”

Karine Jean-Pierre says Biden “understands what it feels like” pic.twitter.com/Pu4BbC8U35

In an exchange last month, he asked Jean-Pierre to explain how raising taxes on corporations were going to lower the price of gas and groceries.

She again struggled to answer the question.

Baby formula is in short supply. Gas prices are emptying your wallet. Grocery stores have missing items that, when on the shelves are exorbitantly priced. But in the end, as Jean-Pierre states, “the president’s economic plan, as we see it, is working.”

If it’s working, the financial ruin of the American people is intentional. And that’s a whole other issue altogether.