Best Shows to Watch After a Break-Up 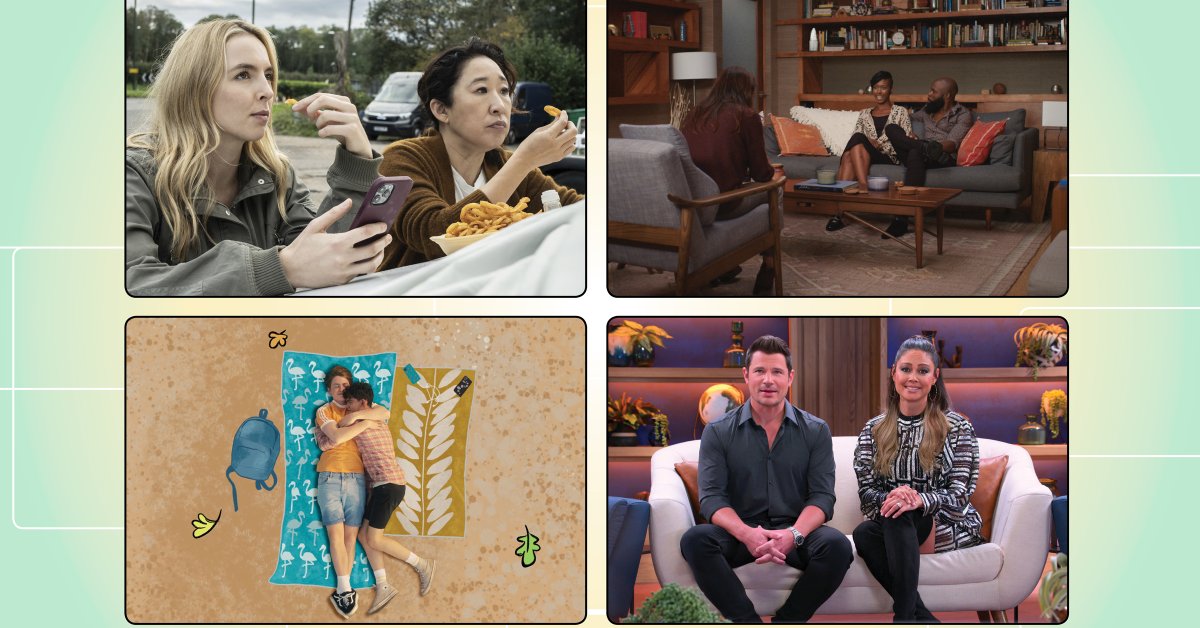 If you’re reading this, chances are you’ve had better days. Breakups are almost always full of complicated emotions, and taking extra care of yourself is more than warranted. If you need some company, there are plenty of TV characters that are up for the job.

Here are eight of the best shows to watch after a breakup, split into categories based on how you might be feeling.

If you’re convinced that love is dead

The wake of a breakup can leave you feeling like burning the whole idea of love down and walking away without looking back. If that’s where you’re at, these shows are for you:

Eve Polastri (Sandra Oh) is just your regular, run-of-the-mill, domestically discontented spy—until she’s assigned to a case tracking the magnetic, enigmatic, utterly chaotic assassin Villanelle (Jodie Comer). What follows is an international whirlwind across four seasons, characterized by sexy stalking, incredible outfits, and a romantic dynamic in the running for TV’s Most Dysfunctional Relationship. Eve and Villanelle take turns vying for one another’s lives in an intricate dance that seems fun at first, but leads to increasingly devastating consequences for them both—a compelling argument against getting involved at all.

How to Get Away With Murder

How to Get Away With Murder follows law professor Annalise Keating (Viola Davis) and her students and colleagues as they find themselves entangled in murder after murder—I cannot overstate the number of murders these people encounter. The show starts out with a dead husband and his dead secret lover, and things only accelerate from there. The show’s characters have some seriously convoluted relationships, and things rarely go well for anyone who has the audacity to fall in love, or even lust—making it the perfect show to watch if you’re ready to go scorched earth on the entire concept of relationships. Plus, with six seasons and a total of 90 episodes to work through, it offers hours upon hours of absurd, deliciously melodramatic distraction—with a few genuinely tear-jerking moments to keep you humble, like Cicely Tyson’s deeply moving performance as Annalise’s mother, Ophelia.

The Ultimatum: Marry or Move On

Want support for the decision to leave the whole concept of love in the dust? Look no further than the mess that is every moment of The Ultimatum: Marry or Move On. The premise of the Netflix reality show is relatively simple: in what is generously referred to as a “social experiment,” six couples spend eight weeks figuring out if they want to get married to each other, begin dating one of the 10 other people available to them, or break up for good. With breakups followed by make-ups followed by more breakups, and multiple marriage proposals in the very first episode, watching this show will make you too confused and exhausted to even think about dating.

If you’ll always be a romantic

Maybe you still want a relationship—just not your relationship. In that case, here are some romances to get lost in:

What could be more romantic than a telenovela? Jane the Virgin pokes gentle fun at the soapy tropes of the telenovela—like outlandish impregnations, secret famous fathers, and dead-but-not-dead lovers, to name a few—while also delivering endearing storylines and some real romance. Gina Rodriguez-LoCicero portrays Jane Villanueva, a woman who is accidentally inseminated during a gynecologist appointment and must navigate a love triangle and the consequences of inadvertent pregnancy on her vow to remain abstinent until marriage and dream of being a writer. Rodriguez won a Golden Globe for her performance in the show, and it was on the American Film Institute’s list of the top 10 television programs of 2014, and won a Peabody. If none of that convinces you, it’s also dreamy.

Heartstopper is a sweet coming-of-age story about a boy named Charlie (Joe Locke) falling for his new friend Nick (Kit Connor)—and Nick frantically googling “Am I gay?” when he realizes he’s falling for Charlie as well. It’s based on the graphic novel and webcomic by Alice Oseman. The show’s primary romance features a coming-out story that’s not without its bumps, but that’s ultimately one of acceptance, which is a welcome change for queer people accustomed to being bombarded with painful rejections both personal and societal. Heartstopper also features a lovely group of friends, cute animations that pay homage to the story’s graphic novel origins, and an appearance by Olivia Colman as Nick’s mom, Sarah.

In this big-hearted, bitingly funny musical TV show, Rachel Bloom stars as Rebecca Bunch. “I’m just a girl in love,” she sings. “I can’t be held responsible for my actions!” After Rebecca runs into an old flame—like, “dated for a few weeks in high school at summer camp” old—she uproots her life as a successful and lonely lawyer in New York City to move to the same town as her lost love: the steadfastly unremarkable West Covina, California. There, she battles her demons, belts out banger after banger, and explores what she’s truly looking for from a relationship. This show isn’t necessarily what it seems, nor is it a romance in the traditional sense, but it will treat you to breath-taking performances from some of Broadway’s best, and take you on a genuinely moving journey.

If your mantra is: wait! Please! We can fix this!

Maybe you think you made a mistake—and perhaps your relationship can be salvaged. If you’re looking to put in the necessary work, here’s some inspiration:

This utterly charming—if not always accurate—portrayal of a suburban mom with dissociative identity disorder is packed with dark humor, star power, and genuinely moving themes of the redemptive power of love of all kinds, in all its messy glory. Created by Diablo Cody (Juno, Jennifer’s Body) and featuring Toni Collette, Brie Larson, John Corbett, Patton Oswalt, Rosemarie DeWitt, and Keir Gilchrist, as well as cameos by Viola Davis and Eddie Izzard, United States of Tara follows artist and mother Tara Gregson (Collette) as she navigates family life with her husband (Corbett), kids (Larson and Gilchrist), and alternate personalities. As she works to untangle the fracturing childhood trauma she’s only beginning to remember—and Collette masterfully portrays an ever-growing roster of characters—Tara and her husband Max face challenges that only Cody’s darkly comic mind could conceive of. They struggle, and are nothing near perfect, but that’s what makes their relationship so real—and what may just give you the faith to give your own romance another go.

Couples Therapy is a docuseries that compassionately explores the emotional stumbling blocks of real couples through their therapy sessions with the unflappable Dr. Orna Guralnik. While such a premise could easily become exploitative, the show instead extends grace and highlights the humanity of people wrestling with the pain and beauty of building a life with another person. The therapy sessions are filmed with consent and understanding from those appearing on the show, but with hidden cameras, to avoid the awkwardness that comes with being watched during your most emotional moments. In addition to making great television, Couples Therapy may just spark a conversation or realization that could help you and your partner see your issues in a new light—or at least inspire you to go to therapy.