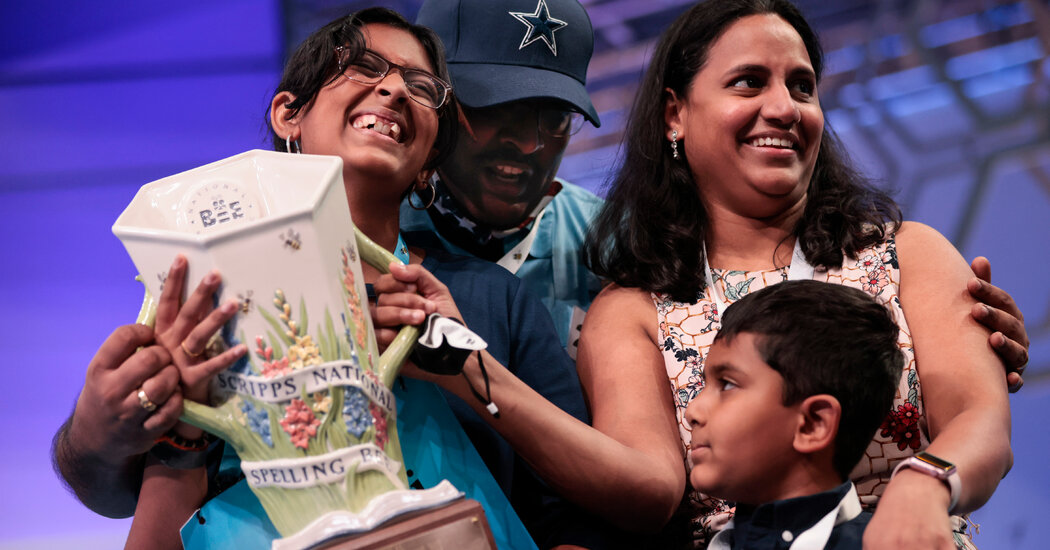 They both knew what was coming.

Harini Logan and Vikram Raju were the last spellers left onstage on Thursday night, having bested 227 other spelling bee contestants, survived a grueling vocabulary round and engaged in a marathon duel of one arcane term after another.

Neither could quite clinch a victory there, and a lectern with a buzzer was wheeled out. Harini, a 14-year-old eighth grader from San Antonio, exchanged a nervous look with Vikram, a 12-year-old seventh grader from Aurora, Colo.

It was time for the spell-off, a 90-second lighting round that had never been used in the nearly 100-year history of the Scripps National Spelling Bee.

What followed was a blistering showdown between the spellers, each rattling off word after word so quickly that the judges had to go to video to determine a winner. After several agonizing minutes, the Bee’s pronouncer announced the results: Harini had spelled 21 words correctly, compared with 15 for Vikram.

“This is just such a dream,” Harini said Thursday night, as she held the trophy during the national television broadcast.

It was a tense victory that came after she was briefly eliminated, and then reinstated, earlier in the finals, when the judges decided that a definition she had given for the word “pullulation” was acceptable.

Vikram stood nearby with his family, visibly trembling and his head bowed with the high emotions of the three-hour contest.

But when the Bee’s host, LeVar Burton, asked Vikram if he would return in 2023, for what would be his last eligible year, the boy, shaking but sounding resolute, gave a decisive “yes.”

To viewers, the pressure of the moment felt akin to penalty kicks in a high-stakes soccer tournament.

“Watching that spell-off, you got a real sense of the actual work of preparing for the Bee,” said Kory Stamper, a lexicographer and the author of “Word by Word: The Secret Life of Dictionaries.” The spellers, she said, had spent months with “rapid-fire spelling over the dinner table, during car pool, after school. You could really get a sense of the daily work. So impressive. ”

This year’s contest was the first fully in-person bee since 2019, and the first in years not to be broadcast on ESPN.

“The Bee is back,” Mr. Burton proclaimed Thursday night, starting off the finals of a contest that has remained a nerve-racking exhibition of intellectual vigor and stamina since its inception in 1925.

Its return was welcomed by many educators, enthusiasts and viewers. Tracey Flemings-Davillier, the president of the New Orleans (La.) Chapter of The Links, an organization that has sponsored a local bee for decades, said that with the country grappling with a mass shooting that killed 19 schoolchildren and two teachers, the contest was a much-needed reminder of the power of education and what children can achieve.

Bees are a “celebration of our children and how precious they are,” she said. “And of what we can do to make sure that the innocence they have and the gifts and creativity they have are not taken away by fear.”

The night began almost as dramatically as it ended.

Just before the competition began, Mr. Burton announced that Surya Kapu, a 13-year-old from South Jordan, Utah, who had been eliminated in the semifinals, had been given another chance to compete.

In the semifinals, Surya had misspelled “leucovorin” — a medicine used in cancer therapy — but his family appealed, arguing that he had not received relevant root information about the word. Scripps agreed but said he would have to spell a new word correctly to make the finals.

Surya got back in, correctly spelling “schläger,” a type of sword.

But he was knocked out in the word-meaning round, which eliminated several spellers — and, briefly, Harini. Her apparent loss shocked spellers who were backstage in the so-called Losers’ Lounge, said Zaila Avant-garde, last year’s winner and the first Black American to win the Bee.

“Harini getting out was horrible and unexpected,” said Zaila, who attended the competition. “Everybody literally screamed when that bell rung.”

But during the pandemic, when spellers competed in various Zoom bees, she gained a reputation as a confident speller who rarely lost, Zaila said.

The judges reinstated Harini after concluding that she was not incorrect when she said that pullulation meant the nesting of mating birds.

Scripps had said pullulation meant the swarming of bees. Merriam-Webster, the dictionary that Scripps relies on, says the definition of pullulate includes both “to breed or produce freely” and to “swarm, teem.”

Once she was back in the competition, Harini seemed unstoppable, confidently spelling words like “charadriiform” and “tauromachian.”

But in the final rounds, she and Vikram were stumped by words like “scyllarian,” “pyrrolidone,” “Otukian” and “Senijextee,” reflecting how, over nearly a century of national spelling bees, the words have become increasingly esoteric.

“The fact that Harini and Vikram are misspelling these words is a testament to how tough these words are,” said Zaila.

Harini and Vikram, she added, “are the absolute best of the best.”

The constant dinging of the bell became demoralizing after a while, Harini said in an interview on Friday.

“Yes, I was missing all these words and yes, this was happening on national television,” she said. “But the fact that I was still in the competition gave me strength to keep on going.”

When it was her turn, Harini said she tried to tune out her fears and concentrated on each word.

“I was feeling that sense of calm,” she said.

Harini recalled fist-bumping Vikram as the two waited for the results.

“It’s been an honor spelling alongside you,” she told him.

Harini said she left the stage with a deep respect for Vikram, who she now considers something of a war buddy.

“We had that mutual admiration of each other as spellers,” she said, “knowing that we’ll both be proud of each other no matter happens.”