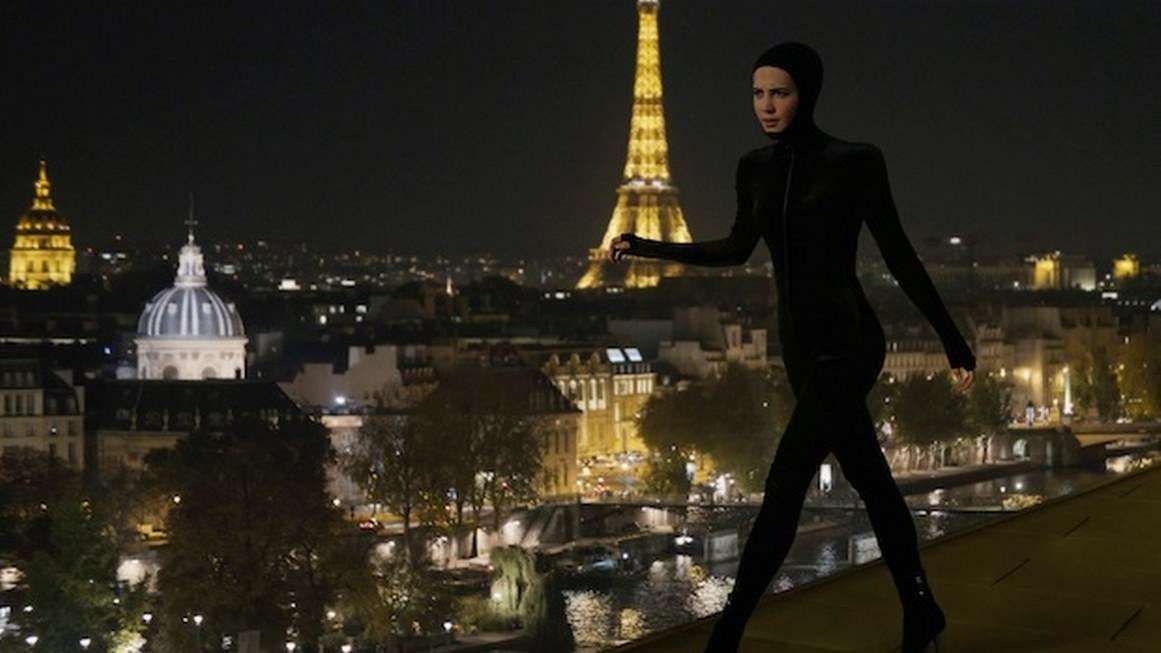 Irma Vep is a TV adaptation of a movie adaptation of a century-old silent film serial. If you hadn’t guessed, all three are French-made, and if you still hadn’t guessed, this latest Irma Vep is as rife with cinematic allusions as a midnight bull session at a film school coffee shop. (Go ahead, start with the anagram of the title.) Like a lot of film school products, it’s full of scathing wit and overheated erotic undertones and a little weak on narrative. And it’s a lot of fun to watch, though the first person to announce “what it means” will get a hard slapping.

If ever a television show called for reading a historical mini-essay before viewing, HBO’s new eight-hour version of Irma Vep is the one. The first Irma Vep film was a 10-part serial called Les Vampires, directed by the French critical darling Louis Feuillade in 1915-16. (For the purposes of this discussion, it’s worth remembering that Jerry Lewis is also a darling of French film critics. And it’s worth noting that the ecstatic modern praise heaped on Les Vampires when it resurfaced on DVD earlier this century included lots of sentences like “masterwork … Machiavellian reflection of a complacent bourgeois order on the on the brink of collapse.”)

For all that, Les Vampires was barely seen outside France, World War I no doubt playing a role in its lapse into obscurity. There it might have remained except that French neo-noir filmmaker Olivier Assayas decided to make it the vehicle for a 1996 lampoon of the state of French film that he titled Irma Vep. Assaya cast his own wife Maggie Cheung as the actress playing Vep, part of a group of sexually frustrated psychos and burnouts struggling to make the original 1916 serial amidst the primitive studio conditions of the day.

HBO’s Irma Vep is, in many ways, simply an expanded version of the 1996 movie, with its focus on film in general rather than simply the French cinema. Alicia Vikander (The Danish Girl) is Mira, the actress playing the role of Vep. She took the job hoping to break away from a run of idiotic but lucrative superhero films (her agent is continually pitching her on a female remake of Silver Surfer: “This is exactly what people want right now: a high concept feminist lady-led superhero movie”) while rebounding from an ugly breakup with her first lesbian girlfriend.

But Mira quickly finds herself being stirred into a pot of professional and personal lunacy. The man with the ladle is the director, Rene Vidal (Vincent Macaigne, The Night Doctor), whose rage against humanity—on previous shoots, among other things, he has tried to run over his lead actor with a car and peed on the set’s megabucks period furniture—is barely being held in check by a cocktail of psychotropic drugs. He doesn’t see a problem. “I’m never happy, ” he assures Mira. I’ve tried happiness, it’s just not for me.”

The cast he has assembled includes Gottfried (Lars Eidinger, Sense8), a crackhead German actor who arrives on the set with a book on Nazi hallucinogens under his arm and a monkey on his back. Gottfried is talented, but his psychosexual theories (he stopped being gay, he says, “because they preach—I’m not interested in preaching, all I care about was sticking my dick up their asses”) do not sow harmony on the set. Others of the cast and crew spend their time begging for sex scenes with their exes, demanding rewritten upgrades of their characters, or posing existential questions about the meaning of the script. “If you say motivation one more time, I’ll strangle you!!!” screams Vidal at one of the actors.

All this is peppered with fatuous art chatter (“zombies are the ultimate alienated individuals”) and cynical industry bitchery by and about disgruntled staff, penny-pinching producers and angry actors, right down to the extras, who are demanding extra pay for scenes in which they must dance. In many ways, Irma Vep is a sort of hilariously addled video version of The Devil’s Candy, the book that documented how the 1990 film Bonfire of the Vanities went screeching off the tracks.

Even so, Irma Vep is simply too bonkers to turn away from. Vikander’s Mira, wandering through the film world’s id—or is it the ego? —is a compelling and witty witness to a production, or maybe even an industry, going to pieces. At one point, she’s summoned by an exhausted and distraught Vidal who tells her of a conversation he had the previous night with his ex-wife in what might have been a hallucination or possibly just a dream. “The ghosts of Irma Vep are not just ghosts,” the ex-wife told him. “They’re our ghosts.” Being haunted has never been so fun.