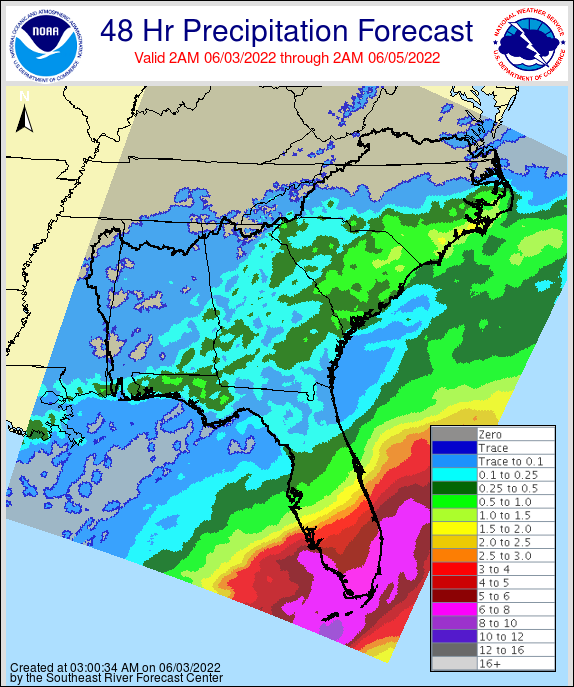 Potential Tropical Cyclone One is growing stronger and new tropical storm warnings have been issued for Florida.

The system is expected to develop a well-defined center and become Tropical Storm  Alex later today, according to the latest advisory from the National Hurricane Center. A system becomes a tropical storm once sustained winds reach 39 mph.

Some slight strengthening is possible while it approaches Florida today and tonight.

The system, currently a tropical rainstorm, will organize slowly and is likely to become Tropical Storm Alex over the waters surrounding the Florida Peninsula or, perhaps, right over the Sunshine State itself, according to AccuWeather.

Will the system strengthen into Tropical Storm Alex?

Data from the  Air Force Reserve Hurricane Hunters indicate maximum sustained winds have increased to near 40 mph, with higher gusts.

When is the tropical storm expected to reach Florida?

The system is moving toward the northeast near 6 mph, and this general motion with an increase in speed is expected to begin later today and continue through Sunday.

On the forecast track, the system is forecast to move across the southeastern Gulf of Mexico through tonight, across the southern and central portions of the Florida Peninsula on Saturday, and then over the southwestern Atlantic north of the northwestern Bahamas Saturday afternoon through Sunday.

Depending on how quickly the storm strengthens, minor coastal flooding may develop Friday and continue Saturday around the Florida Peninsula and Keys, according to AccuWeather forecasters.

Much of the rain is ahead of the center. As it crosses the state, weather may improve significantly Saturday afternoon in southwestern Florida. Central and southern counties should be mainly dry, sunny and warm on Sunday.

What will be the impact of the tropical system on Florida?

Heavy rain will begin to affect Central Florida, South Florida and the Keys today through Saturday.

An area from the Keys to the Everglades, along with the Miami area is likely to receive 8 to 12 inches of rain, with an AccuWeather Local StormMax™ of 20 inches. Much of that rain may fall in 24 hours and could cause street and highway flooding, AccuWeather said.

Tropical storm conditions are expected in the warning area in Florida tonight and on Saturday.

Isolated tornadoes are possible over South Florida beginning tonight and continuing through Saturday.

The combination of storm surge and the tide will cause normally dry areas near the coast to be flooded by rising waters moving inland from the shoreline.

A tropical storm warning is in effect for:

A tropical storm watch is in effect for:

Tracking the tropics in real time:

These graphics, which update automatically, show you activity in the tropics in real time:

We will continue to update our tropical weather coverage daily. Download your local site’s app to ensure you’re always connected to the news. And look at our special subscription offers here.