Reconstructing the Arconia for ‘Only Murders in the Building’ 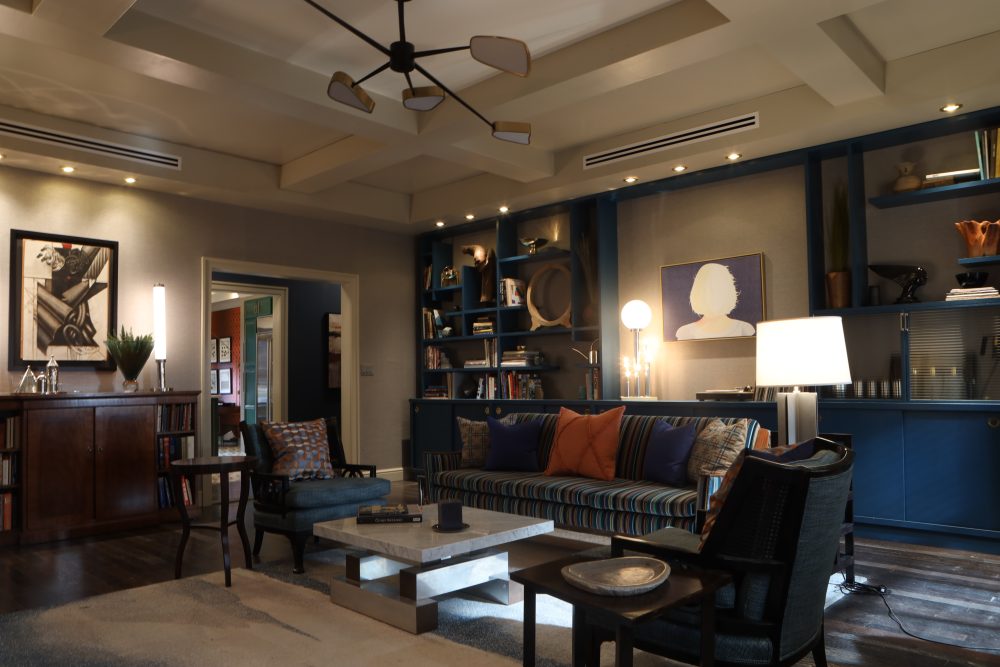 Production designer Curt Beech was tasked with building the Arconia for Hulu’s “Only Murders in the Building,” a luxurious apartment building on Manhattan’s Upper West Side with each residence an envious luxurious design reflecting its owners.

Oliver Putnam (Martin Short), Charles-Haden Savage (Steve Martin), and Mabel Mora (Selena Gomez) are crime-obsessed neighbors who put that obsession to the test when a real death happens inside their building.

Beech breaks down the key sets below and how each interior came together.

“The palette was built around the Paul Smith fabric we sourced for the sofa. This one swatch had everything we needed: masculinity, sophistication, playfulness and a wealth of color options for the team to work with.

“We popped the orange in the kitchen, the blue in the bookshelves, the green in the chairs and the gold in the geometric wallpaper in the foyer.

“Once we had this key element figured out, we were able to contrast it with the choices in Mabel’s and Oliver’s spaces to create a foundation for the look of the show.

“The key piece of art on the bookshelf wall is by Alex Katz. It is meant to express the mystery and constant reminder of the women who once may have been a part of Charles’ life.”

“Mabel’s apartment is a work in progress, and that progress has been interrupted. This is a visual metaphor for the character, and makes us all wonder with Charles, ‘Who are you?’

“By the end of the series, Mabel finally makes her mark on the apartment by painting an intricate mural by artist Laura Pérez on one of the blank walls.

“Mabel’s place is the purest expression of the classic architecture of the Arconia. It has undergone fewer renovations than either Oliver’s or Charles’ homes, but where the apartment is an open book, its resident is not! Ironically, Mabel’s sofa is the most expensive piece of furniture in the show.

“If it wasn’t theatrical, it had to go! This was the simple design rule for creating Oliver’s apartment in the Arconia. The stage was the first design element in the plan of the apartment, and it became the focal point of the space [aside from Oliver’s Louis XIV dog bed]. We wallpapered it in faux gold leaf to give it a glow, and added a bar of theatrical lights and trunks of props adjacent to the bar.

“Oliver’s past is on display here, and as it turns out, so is the past of the decorator Rich Murray and me. We both have graduate degrees in theater and brought all of our theater books and set models out of storage to fill the spaces with projects realized and abandoned.

“Nothing is valuable in Oliver’s apartment, but it all has meaning to him.

“The fabric wall panels in the living room are an Upper West Side gentlemanly Ralph Lauren plaid, and the art and furniture were definitely ‘liberated’ from his many productions.”

‘It Really Has Nothing To Do With Any Of You’

KVIFF 2022: ‘Godland’ is an Especially Stunning Look at Failed Faith