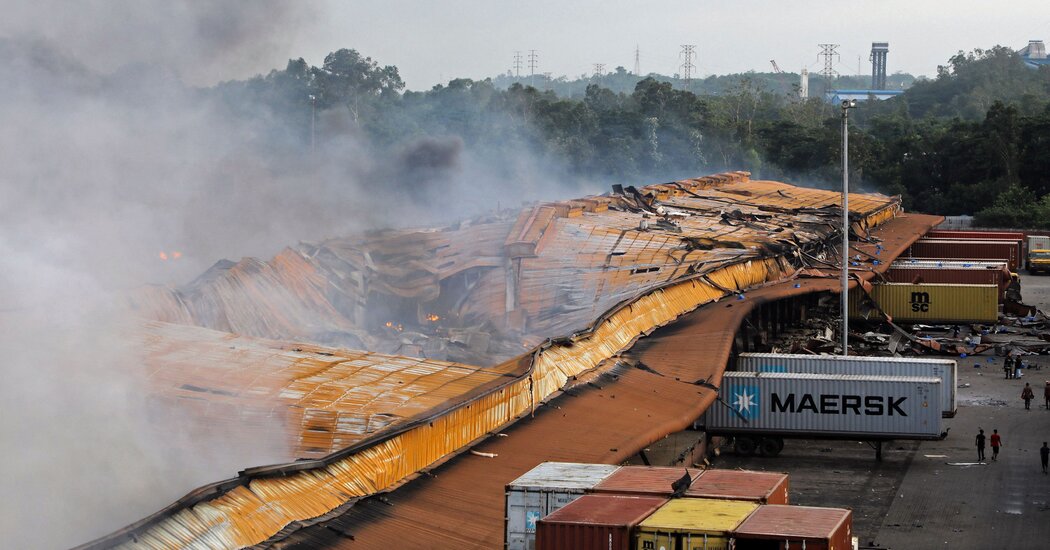 DHAKA, Bangladesh — At least 49 people were killed and hundreds more suffered burns when a fire at a container depot in Bangladesh set off a series of explosions, officials said on Sunday, the latest such disaster in a country where mass-casualty fires have become a recurring problem.

Many people were in critical condition in hospital burn wards, according to local officials, who feared the death toll would rise. By afternoon, two dozen firefighter units were still trying to contain the blaze, which began around 10:45 p.m. Saturday at B.M. Container Depot in the town of Sitakunda, about 10 miles from Chattogram, Bangladesh’s main port.

After the first firefighters arrived, a large explosion rocked the depot, causing the flames to spread. At least five firefighters were killed in that blast, and 14 others were wounded, officials said. More explosions followed, continuing well into Sunday morning.

“The window glasses of my house are broken. Not just ours — we heard from the other people that their windows were also broken, even at two to three kilometers away from the depot,” Majharul Islam, 26, a store owner who lives about 100 meters from the depot, said about the initial explosion.

Mr. Islam said he provided supplies to the vast depot’s canteen and that at any time as many as 500 to 600 people could be working there.

“The explosion took place on one side,” he said, “that is a small part given the whole depot.”

Bangladesh’s prime minister, Sheikh Hasina, issued a statement that expressed “deep shock” over the depot fire and that offered “condolences to the families of the deceased.” Her government’s state minister for labor and employment announced financial help to families that were affected — about $2,200 for the victims and about $500 each for the treatment of those wounded.

The cause of the disaster, at one of Bangladesh’s largest inland container depots, was not immediately clear. Attempts to contact executives at the company that runs the depot were not immediately successful.

Shahadat Hossain, the senior government official for Sitakunda, said that a large amount of hydrogen peroxide may have been stored at the depot, along with other goods. “We cannot say anything further right now,” he said.

Hundreds of people were admitted to Chittagong Medical College Hospital, said Dr. Mohammed Elias Chowdhury, the civil surgeon for Chattogram, which is also known as Chittagong. “Many of them are critical,” he said. “Some people have 60 to 70 percent burns on their bodies.”

Photographs from the hospital showed wounded people laid out on the floor, waiting for treatment. Dr. Chowdhury said all leave had been canceled for doctors and other staff members at the hospital.

Hasan Mahmud Arafat, 25, a university student who volunteered to help at the hospital, said all beds in the burn units were full and that ambulance sirens had blared all night.

Mass-casualty fires and industrial disasters, particularly in garment factories, which account for 80 percent of the country’s exports, have been a recurring problem in Bangladesh. The steady economic growth of the country of 170 million people has been a regional success story in recent years, but human rights and labor organizations have long expressed concern about poor working conditions and workplace safety measures.

The worst of the disasters happened in 2013, when the collapse of an eight-story garment factory killed more than 1,100 people. Last July, a factory fire in the city of Narayanganj killed at least 51 people.