Mysterious raft washes up on Texas Gulf Coast beach, photo shows. Nobody was aboard 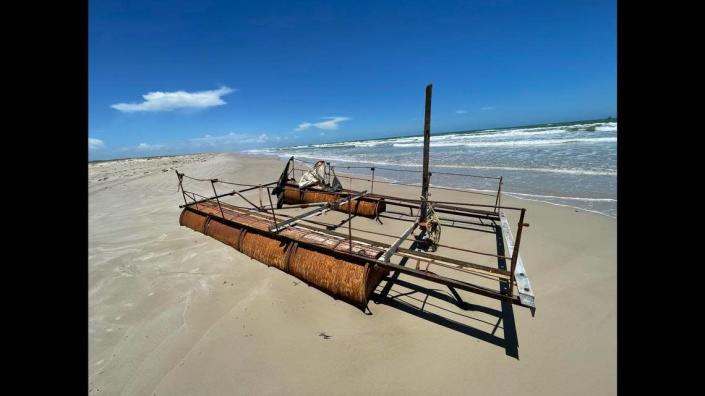 A homemade raft recently washed up on a Texas beach, and the rectangle of rusted metal is raising questions.

Researchers at the Mission-Aransas Reserve came across the raft while combing a stretch of Texas Gulf coastline between Padre Island and Matagorda Island, and shared a photo on social media June 3.

It’s a mystery where it came from or who made it, Jace Tunnell, director of the Mission-Aransas Reserve at the University of Texas Marine Science Institute, told McClatchy News. Whoever put the thing together and brought it out to sea was nowhere to be found.

“Hope the people lived,” one person commented on the post.

It’s possible the raft was built by migrants trying to make it to America, as similarly make-shift rafts have been used in such cases, but there’s no certainty.

“Whoever was on that thing must have had one wild ride,” Tunnell said.

It’s made from humble materials, old metal drums apparently held together with lengths of rebar. The mast is a broken tree branch. On the right side — starboard — clothing is tied to the front, likely used to catch the wind and function as a make-shift sail.

“Who knows where that came from or how long it’s been bobbing out there,” a commenter wrote

Tunnell can’t answer those questions, at least not in this case. He has “no idea” where the raft came from.

The Texas coastal bend gets 10 times as much trash and junk as any other Gulf Coast beach, due to a loop current that reaches from Florida to the Yucatan Peninsula, experts say.

These lost things may invite speculation, but they offer few answers.

Creepy dolls keep washing up on this stretch on Texas coastline. ‘A lot of nightmares’

Highland Park Doctor Asks: How Can We Let This Happen?