BEAUTY
ENTERTAINMENT
Health
Music
Politics
Sports
HomePoliticsThe irrelevance of the debate around the age of Aisha, the Prophet’s...
Politics

The irrelevance of the debate around the age of Aisha, the Prophet’s wife 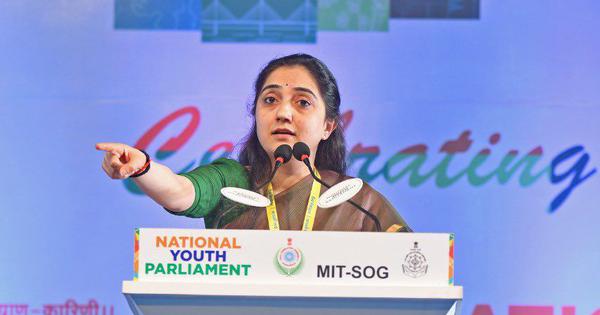 For centuries, Muslims worldwide have grappled with an uncomfortable question – how old was Aisha at the time of her marriage with the Prophet?

On May 26, national spokeperson of the ruling Bharatiya Janata Party Nupur Sharma made disparaging statements about Prophet Muhammad for marrying the young Aisha on national television. On June 5, the BJP suspended Sharma hours after the party said it “strongly denounces insult of any religious personalities”.

Soon after Sharma’s remarks, the internet had exploded with questions about Aisha’s age when she got married and cartoons of the Prophet for marrying someone so young.

In response to this trolling, there were detailed Twitter threads and articles trying to prove that Aisha was a teenager at the time of marriage and not a child.

But are such justifications even required? Are they not helping direct the debate from hate speech to minority insecurity? Beyond this, isn’t the very debate around the age of Aisha fundamentally irrelevant?

To give a brief background of the time period being debated today, we must remember that when the Prophet lived, the world was in the 7th century.

The world was crippled with tribalism. In the subcontinent, there were regional kingdoms whose historical literature is bereft of any feminine existence – as if women did not even exist. It is common knowledge that throughout the world, at that time, women were regarded as mere chattel (assuming that the situation has gotten better in the modern world).

Analysing the first quarter of the last century in India helps us understand the situation. In every home, brides – legally – used to be as young as Aisha. In 1949, the age at which women could be married was raised to the age of 15. Later in 1978, the age of marriage was increased from 15 to 18.

In December, the Union Cabinet cleared the proposal to further increase the age from 18 to 21, for both women and men. However, not much changed even after these legal changes. The Supreme Court guidelines against sexual harassment at the workplace in 1997 arose from the gang rape of social worker Bhanwari Devi for stopping the marriage of a baby girl in Rajasthan.

Even today, in the 21st century, India is home to the largest number of child brides in the world with at least 1.5 million child marriages each year, according to a report by the United Nations children’s fund, or Unicef.

It appears that the current dispensation is more concerned about a marriage that took place around 1,450 years ago than to question why India accounts for a third of the global total of child marriages.

The history of Indian law to restrain child marriages dates back to 1929. In 2006, the Prohibition of Child Marriage Act was introduced defining a “child” as being below 21 years for a male and below 18 years for a female.

Ironically, even the Child Marriage Act does not invalidate child marriages per se – it only puts them in the category of voidable at the option of the contracting party being a child.

In 2012, the Protection of Children from Sexual Offences Act, came into existence defining a child as below the age of 18 years. The Juvenile Justice Act incorporates the idea that a “child” is capable of committing rape.

Even these two earlier legislations acknowledge the consummation of marriage by a “child”. It appears that sexual maturity is not connected with the definition of a child. Then who, in fact, is a child?

In the modern world, the ideas around the definition of a child and the minimum marriageable age have changed over time. With parental consent, judicial waiver or in view of customary practice, many countries relax the minimum age of marriage, even legalising the marriage of somebody as young as 12.

Countries, throughout the world, follow arbitrary yardsticks vis-à-vis the minimum age of marriage. In India, the minimum marriageable age has fluctuated from no age limit to 15 years, then 18 for a long time and now it is edging towards 21 years.

These age limits have also been gendered without any intelligible difference. Needless to say, the standard of fixing these varying marriageable ages has been vague.

One major issue, often ignored, by fixating on the age of Aisha is the infantilism of her by this discourse. It confines Aisha to a singular phase of her life. In addition to fanning anti-Muslim rhetoric, this obsession restricts the life of Aisha to only two events – her marriage with the Prophet and the consummation of that marriage.

The argument is rooted in the assumption that she was “just the wife” of a famous personality. These assumptions are not rare. Look at how Kasturba Gandhi or Kamala Nehru are perceived, always in the context of their famous husbands – MK Gandhi and Jawaharlal Nehru.

However, Islamic history varies when it remembers Aisha. It does not restrain the imagination of Aisha to the singular identity of her being the wife of the Prophet. Which, infact, was the most significant identity to her as evident from her own testimonies but can Aisha be confined to only one singular identity?

Those who think the answer to this in affirmative clearly do not have even the slightest idea of the personality of Aisha and her enormous body of work.

Aisha belonged to an influential family. She was the daughter of the first Caliph of Islam. With the demise of the Prophet, her marriage to him had lasted for a mere nine years. She lived as one of the greatest scholars of Islam for the most part of her life.

Even while Aisha’s marriage subsisted, she had the right to get divorce from the Prophet unlike in India where the idea of divorce for the majority Hindu women – child or otherwise – was introduced for the first time in 1955.

Aisha lived for more than 40 years after the death of the Prophet. She wrote extensively about the Prophet and her marital life. Throughout her life, she fondly spoke of the smallest of details of her short-lived marriage with the Prophet.

Muslims, worldwide, drive the most part of the Islamic jurisprudence through the massive scholarly work of Aisha. Those born and brought up in a different worldview are not entitled to speak for Aisha when Aisha has spoken sufficiently for herself.

By no means am I advocating child marriages. What I am suggesting is that one should refrain from casting their ideas of morality, developed within a contemporary world, to different times and cultures.

What I am advocating is that the debate must be redirected. Instead of questioning the age of Aisha, the question should be how a religious figure can be insulted on national television with impunity in India.

Once we are done with obsessing over a centuries-old marriage, I hope that as a society, there will be time to address the actual looming question – what made us so comfortable with one community’s dignity being publicly disrobed every day? The burden of proof must fall on the hate mongers.

To the apologists from the Muslim community, one must understand that there will always come a point where faith will surpass popular logic and rationalisations, particularly those derived from a modern worldview. This will remain the real test of faith and perhaps the burden of faith.

Nabeela Jamil is a Delhi-based lawyer.