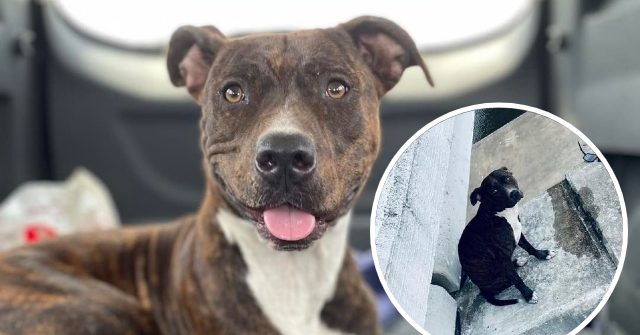 A cycling group called “Smash Bros Plus One” in Fort Worth, Texas, came upon something unexpected not long ago.

The “plus one” in the group’s name refers to cyclist Abbey Robinson, the only woman in the group, the members of which normally ride together once a week. However, this week, the group conducted a second ride, WFAA reported May 27.

“We didn’t have anything going on so it’s just like, let’s ride to Dallas and back,” Chris Williamson told the outlet.

The group had journeyed pretty far when it reached a bridge over a drainage ditch and saw a woman who had stopped her vehicle and was shouting about a dog. To their surprise, the animal was sitting on a beam below the roadway.

In a social media post on May 22, Saving Hope Rescue shared photos of the incident and said Animal Control was called to the scene.

“As soon as I got over there and grabbed a hold of her, we were golden,” said Williamson, who then scooped her up and lifted her to the other cyclists.

Social media users praised their efforts, one person commenting, “There are angels walking amongst us. Thank goodness for good people! Heroes indeed.”

“She’s beautiful! So glad she was saved! Thank you to all that were involved in her rescue!” another replied.

The group nicknamed her Mo to honor Moriah Wilson, the late pro-cyclist. Mo was being cared for by a foster family, and Saving Hope Rescue was raising funds for her upkeep.

“I mean it needed to be done, and who else is gonna do it if you don’t just jump in and do it?” Williamson stated.