Emma Thompson Made the Best Sex Movie of the Year 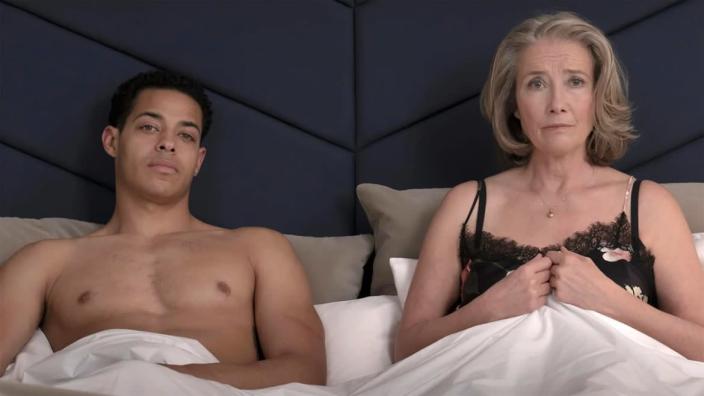 This is a preview of our pop culture newsletter The Daily Beast’s Obsessed, written by senior entertainment reporter Kevin Fallon. To receive the full newsletter in your inbox each week, sign up for it here.

Give Emma Thompson an Oscar!

Emma Thompson is never not good.

She’ll do something that seems like a total lark—doing the kids’ movie thing in Nanny McPhee and Cruella, writing a Christmas movie based on a cheesy Wham! song, playing a late-night talk show host in a Mindy Kaling movie—and be utterly brilliant. In the monstrous turd of a film Dolittle, she voiced a wise macaw named Polynesia, and she still, in spite of everything offensively atrocious about that movie, managed to be pretty damn great.

And when she’s in things that are supposed to be good, of course, she’s reliably phenomenal. I mean, just the sheer number of times she’s moved me to shed a single tear that I must wipe with the stretched palm of one hand, as if I had just received a Joni Mitchell CD for Christmas from my husband who was having an affair…

The point of this is to say that it shouldn’t come as a surprise when Thompson delivers an award-worthy performance in a new film. But it’s a testament to her talent that what she accomplishes in Good Luck to You, Leo Grande manages to somehow present her anew, with that aforementioned brilliance showcased in a novel, refreshing light.

It’s not just that you may not expect Emma Thompson to be the star of what is the best sex movie of the year, and perhaps even the best one in a very long time. It’s that she finds a kind of humanity and vulnerability in a sex movie that explores the insecurity and shame that is associated with intimacy and pleasure—aspects that Hollywood so often ignores.

She plays a widow cautiously attempting to experience all the sexual activity her long, boring, and chaste marriage never afforded her. She hires a young escort (the titular Leo, played by Daryl McCormack) to help through a checklist of sexual acts she hopes to explore, perhaps even achieving the orgasm that she has never experienced in her life.

What she learns is that sex and intimacy is about more than checking off boxes. The more that becomes apparent, the more that frightens her. It’s empowering to want to feel sexually vibrant, but it’s also not something that can just be turned on, so to speak. It’s a difficult journey, one that Thompson chronicles with her signature charm but also extreme vulnerability. The final sequence alone will have anyone who watches in awe for a long time after the credits roll.

It’s a small movie, but one that deserves a lot of attention. Go see it!

My Crushes Really Delivered This Week

I am a brand new person. In an instant, I have been transformed on a molecular level, my soul refreshed—an entire worldview refreshed and radicalized. I had one existence, and it changed in an instant. I saw the photo of Ryan Gosling as Ken in the Barbie movie, and will never be the same.

When I close my eyes, it is not the darkness of my lids that I see, it is tan Ryan Gosling looking like the hot guy at the Brooklyn gay bar that I would be too intimidated to talk to, but will obsess over for weeks as if he’s my actual boyfriend. My bank account is now empty and my credit cards maxed, as I have ordered every single piece of decor, fashion, and memorabilia onto which I could feasibly have this image screenprinted.

It has come to my attention that there are some people who do not enjoy that photo, and in response I would like to officially announce my candidacy for President of the United States on the platform of permanently banishing them from society.

The truth is, it’s been a banner week for having the most basic of Hollywood crushes. There’s not just Ryan Gosling thirsting to do, but Chris Evans has also made several strong cases for collective swooning this week. The clip of him discussing his facial hair that is absurdly, yet extremely sexual and his eloquence talking about the same-sex kiss “scandal” that has followed Lightyear: He’s making points.

So congrats to all of us on this sliver of fun from the week.

This horseshit has come around again. I’m glad it has! I had almost given up all hope of ever owning a home, now that I live in a city where apparently you are required to make at least $160,000 a year in order to afford a one-room apartment.

But oh my goodness, before reading this article I had never considered that if I could just stop myself from my carnal need to watch Selling Sunset, I could pocket $20 and absolutely be able to buy myself a house in no time!

Sorry, Stranger Things Season 4, Part 2! I’ve got a few Andrew Jacksons in my pocket, which according to this article must be enough to put a down payment on a house.

This Photo May Save Us All

What if we all just stopped stressing about things and spent a few hours staring at this photo? I think it would be how we finally find world peace.

What to watch this week:

Cha Cha Real Smooth: Don’t trust the killjoys who say you shouldn’t be charmed by this movie! (Fri. on Apple TV+)

What to skip this week:

Lightyear: This movie makes no sense! How did this happen?! (Fri. in theaters)