Former aide to Jose Huizar testifies on demands for bribes 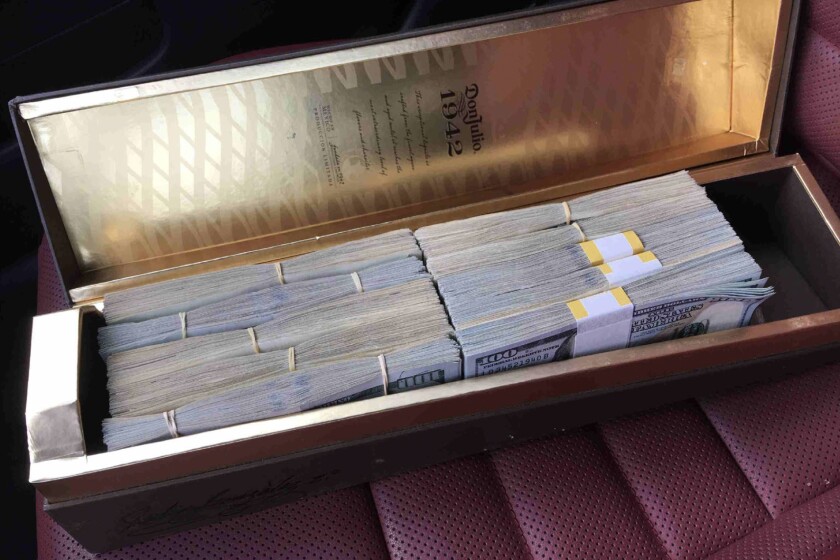 A high-level aide to former Los Angeles City Councilman Jose Huizar gave jurors a vivid look at the pay-to-play schemes allegedly pursued by his boss, describing paper bags filled with bribe money and demands for concert tickets and other gifts.

George Esparza, appearing Friday in the first of three trials dealing with the Huizar case, told jurors that he took part in two “money drops” in 2017, picking up cash from a developer’s go-between and then delivering the money to the councilman in liquor boxes — all while taking copious notes on his own criminal activities.

Esparza, who worked several years as the councilman’s special assistant, said his boss assigned him to find the point person for each real estate developer who had business before Huizar, then hit them up for political donations, hotel stays, event tickets or other benefits.

At the time, Huizar was in charge of the committee that reviews real estate proposals at City Hall. As a result, he had the power to keep a development project off of meeting agendas — creating delays and driving up construction costs — if he concluded that the developer had been unresponsive, Esparza said.

“I was taught to be very clear on what the message was,” Esparza said. “If you don’t help the councilman with his requests, your project will be stalled.”

Esparza, 35, began testifying on Day 4 of the federal trial against Dae Yong Lee, a businessman accused of paying a $500,000 bribe to ensure Huizar’s support for his planned 20-story residential tower. Lee, also known as David Lee, has pleaded not guilty to bribery, wire fraud and obstruction of justice.

Huizar, who stepped down from the council two years ago, has pleaded not guilty to bribery, racketeering and other charges. His attorneys had no comment on Esparza’s remarks.

Lawyers for Lee have described their client as the victim of a real estate consultant who repeatedly lied to him and to FBI agents. Lee, they said, believed his $500,000 was going to pay for legitimate consulting work — not bribes for public officials.

Friday’s testimony offered the first public remarks from Esparza since 2020, the year he pleaded guilty to a racketeering conspiracy charge in the sprawling federal corruption case. Esparza admitted taking part in a criminal enterprise in which he received an array of financial benefits — cash, casino chips, golf clubs, hotel stays, private jet travel — from people seeking help with high-rise development projects or other business pursuits.

Esparza said Huizar kept an internal spreadsheet that tracked development projects, their consultants and “what the ask was.” The councilman spoke in crass terms about his demands, saying he wanted to see if the “cows are willing to give milk,” the former aide said.

Esparza, who grew up in Boyle Heights, said it had been his dream to work for Huizar, whom he described as a friend of his family. He said he was Huizar’s driver and “trusted confidant,” picking him up at his home in the mornings, dropping him off late at night.

During three hours of testimony, Esparza laid out what he described as an effort by Huizar to wring money out of Lee, who needed the councilman’s help with his plan for a 232-unit high-rise on Olympic Boulevard. Lee’s project received an initial sign-off from the planning department in July 2016. But a union group filed a challenge weeks later, raising the possibility that its fate would be decided by the council.

Justin Kim, a real estate consultant then working for Lee, asked Huizar for help in getting rid of the challenge, which was filed by Creed LA, a group that represents construction trade unions, and lobbies public officials to ensure that real estate projects are built with union labor.

Kim, a campaign fundraiser for Huizar, was a political friend of the office, Esparza said. But the councilman was also close to organized labor, making Kim’s request a “heavy lift,” the former aide said.

Esparza said he let Kim know that “the councilman won’t be doing this for free.”

Esparza said he took Huizar to a dinner meeting with Kim to discuss the union challenge in September 2016, followed by a karaoke party with “escort” services, which Lee attended. Huizar was “definitely on a good high” on the ride home, Esparza said.

“Nothing made him happy more than money and women,” he said.

In January 2017, Esparza said, Huizar assigned him to contact real estate experts to determine how much Lee would save if the union appeal went away. Esparza concluded the answer was $30 million.

Lee eventually came back with a $500,000 counteroffer, Esparza said. Huizar accepted and promised Esparza a $100,000 cut, the former aide said.

Esparza said he picked up his first bag of cash from Kim in February 2017, delivering $100,000 to Huizar in a Don Julio tequila box. Huizar told him to take the money home and store it in a safe, Esparza said.

Huizar met with a lobbyist for Creed LA later that month, Esparza said. In March 2017, Creed LA dropped its appeal.

Esparza told jurors he picked up a second paper bag of money that same month, delivering it to Huizar in a Johnnie Walker Blue Label box. Huizar again told him to store the money at home, Esparza said.

Esparza said he took copious notes on the proposals and counterproposals, while also taking pictures of the stacks of $100 bills he picked up. The former aide said he did so because he was nervous that Huizar would pin the scheme on him if the FBI caught on.

“Knowing my boss, I knew I would be the fall guy,” he said.

Esparza has not yet been sentenced in the case. Neither has Kim, who pleaded guilty to a federal bribery charge in 2020.

Ariel Neuman, an attorney for Lee, will have the opportunity to cross-examine Esparza on Tuesday. During the trial, he has accused the prosecution of giving Kim a “sweetheart deal,” allowing him to avoid charges on a number of crimes. In court filings, Lee’s lawyers also took aim at Esparza’s credibility.

“Esparza is a convicted felon who, in his plea agreement, admitted that he lied to the FBI in at least five separate instances,” they wrote in one recent filing.