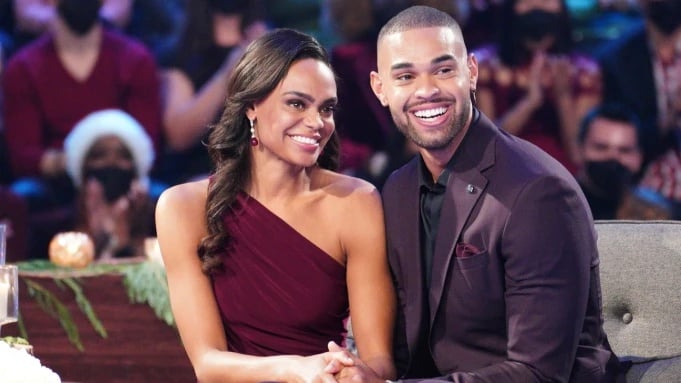 The sad rumors have become an unfortunate reality.

Late on Friday, just a few weeks after Michelle Young had blasted reports that her relationship with Nayte Olukoya was on precarious footing, the recent Bachelorette made an announcement:

The engagement is over.

“To those who have supported Nayte and I, including Bachelor Nation, I know I speak for the both of us when saying having a relationship in the public eye has not been easy,” the 29-year old wrote via her Instagram Story.

“I’m struggling to say that Nayte and I will be going out separate ways.

“But I stand with him in knowing the heaviness that is present in both our hearts as this relationship has been very real for us.”

The first Black woman to ever anchor this franchise, Young was a contestant on Matt James’ season of The Bachelor prior to being named the lead.

“To you, Nayte, you quickly became my best friend and the love I have for you is incredibly strong,” she added in her break-up post.

“I will never stop wanting to see you succeed.”

Back in late May, Young took major exception to speculation that her romance was on the rocks.

At the time, Young fired back after footage emerged of her without her engagement ring on, claiming she only took it off for a brief period of time.

“Just a friendly reminder that Nayte and I, we are human beings, not a zoo exhibit,” Young told followers in that message.

“Not to mention, videoing somebody without them knowing is creepy! It’s not cool!”

“I will always acknowledge and appreciate the adventures, support and growth both Nayte and this experience have brought me,” Young continued in her update.

” At the same time, I’m deeply hurting and will need time and space to work through this heartbreak.”

For his part, Olukoya mostly echoed his ex-fiance’s sentiments.

“Michelle and I are going to move forward separately,” wrote Olukoya, who proposed in December.

“Hearts are heavy, emotions are high and we are dealing with this the best way we can.

“When we both started this journey, we were looking for our soulmates. Our forever. Our best friends.

“However, as we grow and learn, we also really that sometimes somebody that you hold dear to your heart isn’t somebody you’re meant to spend the rest of your life with.”

“I have decided to step out of the classroom,” Michelle said while growing emotional.

“It has been a complete whirlwind hanging out with my students, teaching in the classroom and then living that double life as a Bachelorette, walking red carpets and going to premieres and, wow, have things changed.”

She explained that she’s been in “survival mode” for two years — and, therefore, has decided to take time away from teaching to ensure she was “taking care of myself” first and foremost.

We applaud her for doing so and wish her the best of luck moving forward.

Surfside Condo Collapse Doc in the Works From Miami Herald