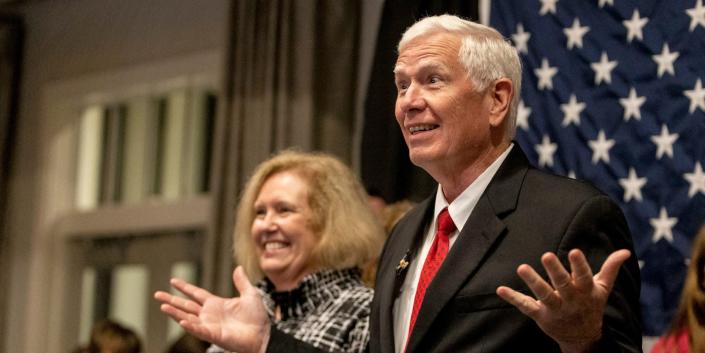 Rep. Mo Brooks this week said he’s retiring from politics after he lost his Senate primary to Katie Britt on Tuesday night.

Brooks, who was once a champion of Trump’s post-2020 election fraud lies, slammed the former president for having “no loyalty” and not being a “man of his word.” The lawmaker told Beavers that Trump won’t do anything unless it “enhances his wallet or his ego.”

Though once a loyal Trump supporter, Brooks has since accused the president of repeatedly asking him to illegally “rescind” the 2020 election as the two men’s relationship has publicly fallen apart.

Brooks’ Tuesday comments seem a fitting conclusion to the on-again-off-again relationship between Brooks and Trump, which began when Brooks first failed to win the president’s endorsement back in 2017, despite being a vocal Trump supporter among his fellow House lawmakers.

After leading the charge in supporting Trump’s baseless claims about the 2020 election, Brooks earned Trump’s endorsement for Senate in April 2021.

But in March of this year, Trump rescinded his endorsement, saying Brooks “went woke” after the lawmaker said Republicans should look to the future and not focus on the 2020 election. Trump’s reversal came as Brooks’ fundraising and poll numbers were dropping.

Then, in June, Trump endorsed Brooks’ rival, Katie Britt, former chief to retiring Sen. Richard Shelby, as she surged ahead in the polls. The move prompted Brooks to appeal for the former president’s reconsideration in a lengthy Twitter post, in which he asked Trump to once again back him in the Senate race, instead of “establishment RINO” Britt.

But when the former president failed to do so, Brooks bashed Trump on Twitter one week later over his endorsement of Britt.

On Tuesday night, Britt handily defeated Brooks in the Republican primary. If she wins the general election come November — which she is expected to do — she’ll be the first woman elected to represent Alabama in the Senate.

In his concession speech Tuesday night, Brooks said he was looking forward to spending more time with his family, which includes 13 grandchildren.

“It’s time for me to hand the torch over to patriots who will continue to fight for America. We have a lot of people from the younger generation that are willing to carry that torch,” he said, according to Alabama Local News. “And I’m so proud of them. And I want them to fight for America as I have.”

But Brooks’ time in DC may not be over quite yet. The House committee investigating the January 6 Capitol attack said in May that it wants Brooks to testify after he told a local Alabama news outlet that Trump pressured him to try and overturn the election following President Joe Biden’s win.

Now, Brooks says he may be willing to testify before the panel, as long as it takes place entirely in public, according to CNN.

“My basic requirement is it be in public so the public can see it — so they don’t get bits and pieces dribbled out,” the lawmaker said, according to the outlet.