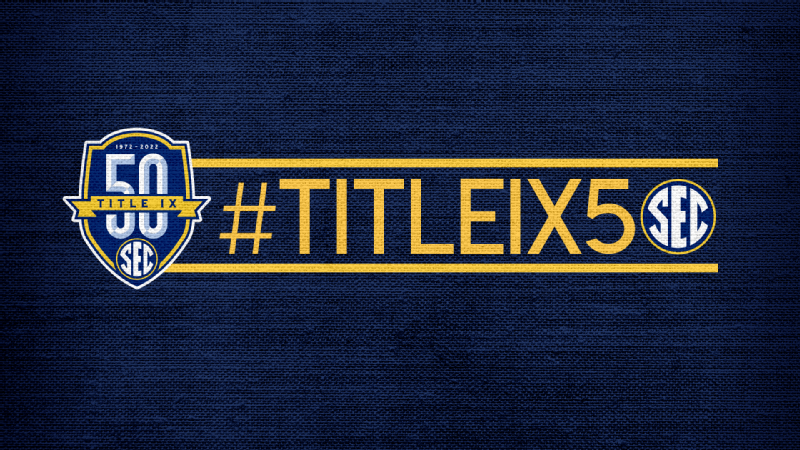 BIRMINGHAM, Ala. (June 23, 2022) – On June 23, 1972, the Title IX of the Higher Education Act was passed as U.S. legislation. It was enacted to ensure: “No person in the United States shall, on the basis of sex, be excluded from participation in, be denied the benefits of, or be subjected to discrimination under any education program or activity receiving Federal financial assistance.”

�� “No person in the United States shall, on the basis of sex, be excluded from participation in, be denied the benefits of, or be subjected to discrimination under any education program or activity receiving Federal financial assistance.”#Fifty50 | #TitleIX50 pic.twitter.com/YigL3P4EXH
– Southeastern Conference (@SEC) June 23, 2022

Title IX has had an impact on American society in many different ways including ensuring women athletes equal opportunities to compete and succeed in sports. The Southeastern Conference has been a leader in providing opportunities for women in sports and has enjoyed five decades of success.

SEC women student-athletes make a difference every day in competition, in the classroom and in the community. This year, the 50th anniversary of Title IX, we celebrate their successes and look to the opportunities ahead in SEC women’s athletics.

A BRIEF LOOK BACK AT A CHAMPIONSHIP HISTORY

Basketball, volleyball and tennis were the first sports to be recognized with a conference championship during the 1979-80 athletic year. The Kentucky Wildcats won the first league title in any SEC women’s sport by winning the volleyball championship with a 35-18 record and a 3-1 win over Tennessee in the tournament finals.

Later that year, Florida became the first team to win a tennis championship in the SEC.

Later in the 1980s, more SEC teams would claim national titles for the first time in their sport for the conference. Florida won the NCAA golf title in 1985, and in 1987 Georgia took the gymnastics title, LSU won both the indoor and outdoor track titles and Tennessee won its first women’s basketball national championship.

In 1988, Auburn and Tennessee reached the Final Four of the women’s NCAA Basketball Tournament, marking the first time one conference had two teams in the final round. Also in 1988, the Kentucky Wildcats took home the SEC’s first national title in cross country.

In 1992, Florida won the NCAA Division I Women’s Tennis Championship, the first of ten national titles in women’s tennis for the conference.

Southeastern Conference schools came together in 1993 to adopt the Principle of Gender Equity recognizing that each school will provide at least two more women’s intercollegiate programs than the number of men’s teams.

Soccer became an SEC sponsored sport in 1993 with four teams playing (Arkansas, Auburn, Kentucky and Vanderbilt) and Vanderbilt defeated Arkansas in double overtime to take the first SEC crown in soccer. All 12 members began play in 1996.

In 1998, Florida won the SEC’s first and only national title in soccer by taking the NCAA Division I Women’s Soccer College Cup over North Carolina.

In 2012 it was announced that the SEC would determine a league champion in equestrian beginning in the 2012-13 season. It became the 21st sports sponsored by the league. South Carolina won the first conference title in equestrian and Auburn claimed the SEC’s first national title in the sport in the same season. Also in 2012, Alabama won the SEC’s first national title in softball.

Arkansas won its first NCAA Women’s Cross Country title in 2019, and the only national title for an SEC team in the athletic year as collegiate sports were later canceled due to the global Covid-19 pandemic. With the win, Arkansas became only the second NCAA women’s team to accomplish the three-season triple crown.

In 2021, Kentucky became the first SEC program to win a national title in volleyball, giving the SEC at least one national championship in every sport it sponsors.