The Pleasure and Pain of Celebrating Pride in Florida 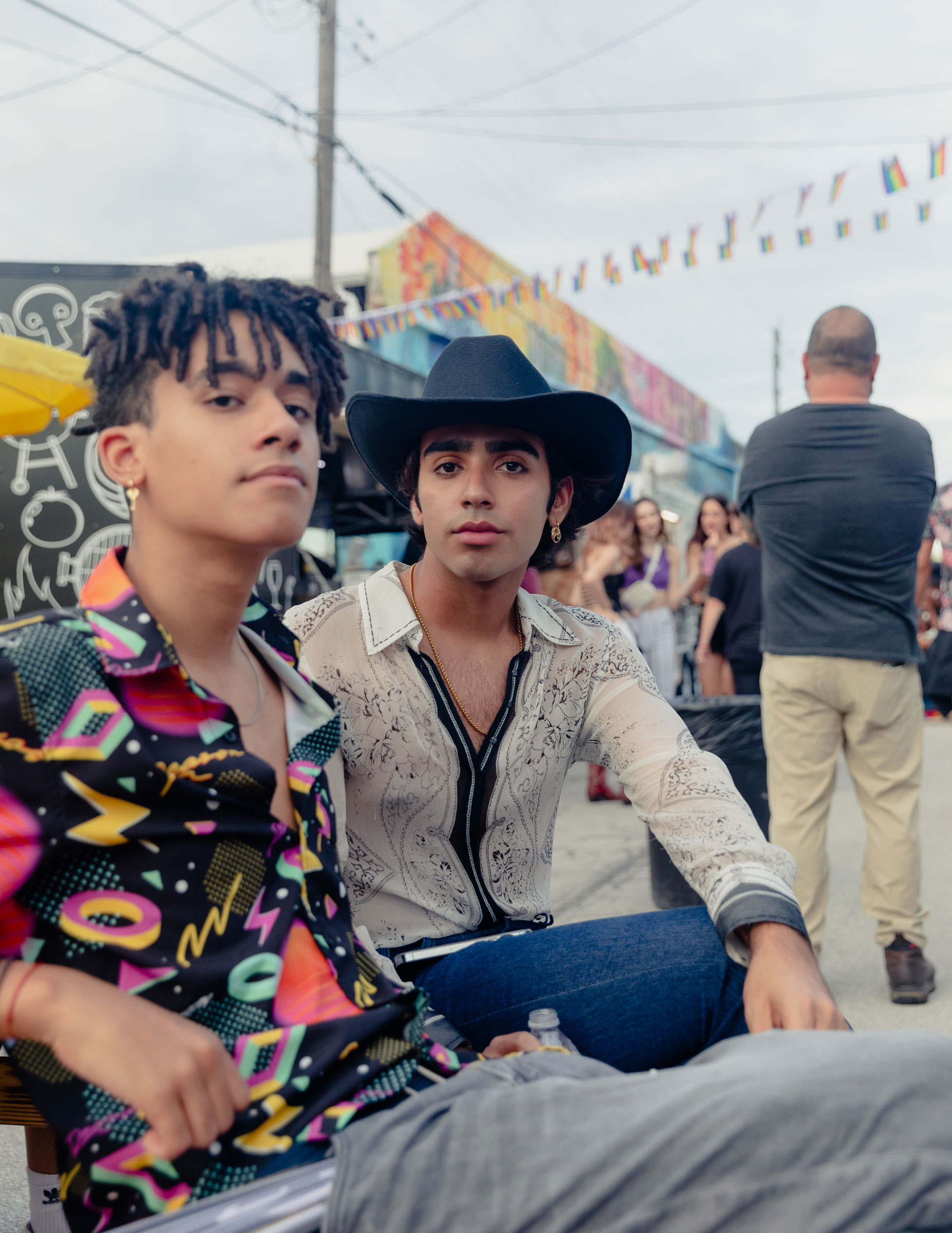 It’s been pouring for two days straight, but we’re on our way to Wynwood for Pride. The Lyft driver complains continuously as he navigates traffic on the gridlocked highway. He says he hates living in Florida, notes that he and his wife both want to move away, but if they do, they want to be 1,500 miles apart, because they can’t be in the same room without fighting.

“I’m going to live in Wyoming, be a cowboy,” he announces, nearly rear-ending a Camry as he turns to look at us. “She can go to California for all I care.”

Read More: The Pain and Pride of a Generation Changing How America Sees Gender

I take my girlfriend’s hand and squeeze it, twice, the way we always do when we want to remember to joke about something later on when we’re alone. I keep our hands pressed against the seat as I do this. I can’t be sure how the driver will react if he sees that we’re holding hands. Being queer in Florida means learning to carefully navigate unfamiliar people and places, feeling out the dangers ahead of time so you can avoid a harmful interaction. But this time it’s fine. The driver, too busy yelling at another car that’s cut him off, doesn’t notice that we’ve touched.

A couple takes photos at the MokiBaby art installation in the festival grounds.
Alfonso Duran for TIME

By the time we get to the venue, the rain has stopped, as if it were simply waiting for all the queer people to arrive before showing off the rainbow after the storm. The ground is muddy and my girlfriend has worn the wrong shoes, sandals that slide around as we work our way through the throngs of people. I laugh as she slips in the muck, and she laughs too, clutching my arm for support. We don’t have to worry about touching each other here. Nobody will frown or say anything nasty when I rest my hand on her waist or drape my arm across her back and play with her hair. We kiss as we wait in line for drinks, overpriced beverages called Sugar Daddies that contain a fair amount of vodka and Red Bull. We stand beneath a tree to sip from them and get our bearings. Water drips from the leaves and plops on our heads as wind suddenly rushes the branches. There’s supposed to be a drag show, but when the first performer’s music comes on, she sends someone out to say she’s not ready yet. Five more minutes, they announce. Thunder rumbles in the distance, a warning of future storms.

It is, despite all its flaws, a perfect Pride.

There is something magical about being in a place with so many queer people. Perhaps for me this comes from the fact that I’m estranged from my own family. I look to my community for support, to feel seen and understood. It’s a balm to be standing together in the unpredictable Florida weather, staring up at a huge screen as music pumps from the gigantic speakers that line the main stage. The show starts, and everyone cheers. A queen does a flip and then throws off her cape, revealing a Wonder Woman costume complete with gold cuffs. I turn to my girlfriend, tipsy from my drink, and announce that I love gay people. The person next to me loudly agrees, even though we don’t know each other and haven’t spoken all night. We don’t have to know each other to get the feeling. The moment is electric, jolting from person to person. It’s a collective joy.

Tory Stiletto greets guest as they walk into the festival grounds.
Alfonso Duran for TIME

A young woman approaches us clutching a stack of clipboards. She’s there with Equality Florida, and she’s asking attendees if they’ll sign a petition to help fight the “Don’t Say Gay” bill. She’s earnest and sweet. She tells us they’re hopeful they’ll get enough signatures to really make a difference. There’s a section on the form that lets a person check that they’d be willing to volunteer their time to help out with other LGBTQ+ Florida issues. I’m struck speechless with gratitude to see that so many people have already signed and that almost everyone had indicated they’d like to volunteer. Queer community is so much bigger than the individual. It is selfless love.

Read More: I Know What It’s Like to Be a Florida Teen Who Can’t Say Gay. I Was One

Alongside the woman with the petition, there are a plethora of other volunteers registering voters. It’s gloomy and damp out and there are puddles everywhere, but these volunteers have smiles on their faces that light up the venue. Someone walks over to my girlfriend and tells her she’s beautiful, then five minutes later comes back and yells it again to the crowd.

“You’re really gorgeous,” they say. “I just want everyone to know.”

My girlfriend and I kiss again. People hug, share drinks, take pictures. Friends greet each other from across the wide lawn, arms waving high in the air as they make their way to one another. Tears well in my eyes. I’m happy, but I’m also homesick for central Florida, for the community I’ve built there too—for the Prides I’ve attended in downtown Orlando, parades full of sweaty queers in short-shorts and tank tops, everyone trying to combat the heat, clutching rainbow flags, long lines for the bathroom where people make friends while they wait, the Lake Eola swan boats sitting pretty in the glitter of the lake.

An attendee at Wynwood Pride watches the performers.
Alfonso Duran for TIME

A glam station at the festival.
Alfonso Duran for TIME

There are a million ways to celebrate Pride, but sometimes it’s hard because your state and its representatives don’t want to celebrate with you. We’re living in Florida, the same place that passed the “Don’t Say Gay” bill, a place that wants to make it easier for school districts to ban books with LGBTQ+ themes, a place that doesn’t provide nearly enough protection for trans kids. I want to feel jubilant in that moment, dancing with my girlfriend in a crowd full of queers—and I do feel that happiness, sitting in my breast like a glowing ember. It feels good to be filled up with something besides bitterness and terror, to feel embraced and held. To feel loved. But I also want to make space for the things that frighten and worry me all year long. Pride started as a riot. It’s been a fight since the beginning. I want to remember the pain as well as the pleasure. I think about that a few days later as I sit at home alone on my computer. I’m watching a livestream of a tribute to the victims of the Pulse shooting.

Read More: Coming Out to My Kid Helped Me Come Out to Myself

As a queer person who grew up in Orlando, I have a hard time talking about the events at Pulse. I know I am not alone in this. It’s six years later, but the collective grief is still just as strong. I am living in Miami for the moment, but it still feels like I’m there at the memorial as I watch Shawn Welcome, Orlando’s poet laureate, read in honor of those who were taken from us. People tap at their computer screens from all across the country, electronic hearts floating up the side of the monitor, out into the ether, a way for all of us to touch even if we can’t be there together. Even if everything feels very far away, our queerness connects us. We’re still holding and supporting each other.

This is what Pride is, I think. It’s joy, but it’s also a remembered hurt. It’s an ache. It’s a memorial and a reminder to celebrate sweetness alongside the bitter.

Soon June will be over. The online avatars will return to their pre-rainbow state. Corporations will take their Pride merch out of stores and we’ll be left waiting for next year’s events, holding out hope for allyship that lasts longer than 30 days out of the year. As we absorb the daily news, the reports of queer books being banned from libraries and schools, of laws being passed that take away people’s reproductive rights, I want to lean into the hope of what I can actually do. Checking “Yes, I want to help” on that volunteer form. Holding my girlfriend’s hand where anyone can see it. Being unafraid to be visibly queer, even if it means risking retaliation from those who might wish me harm.

I think of people dancing in the rain. Holding hands. Laughing and kissing each other.

I think of people at the Pulse vigil. Holding hands there too.

Pride is a commemoration. A celebration. A reckoning. A vow.

That’s what I want for my community. Pride all year long.