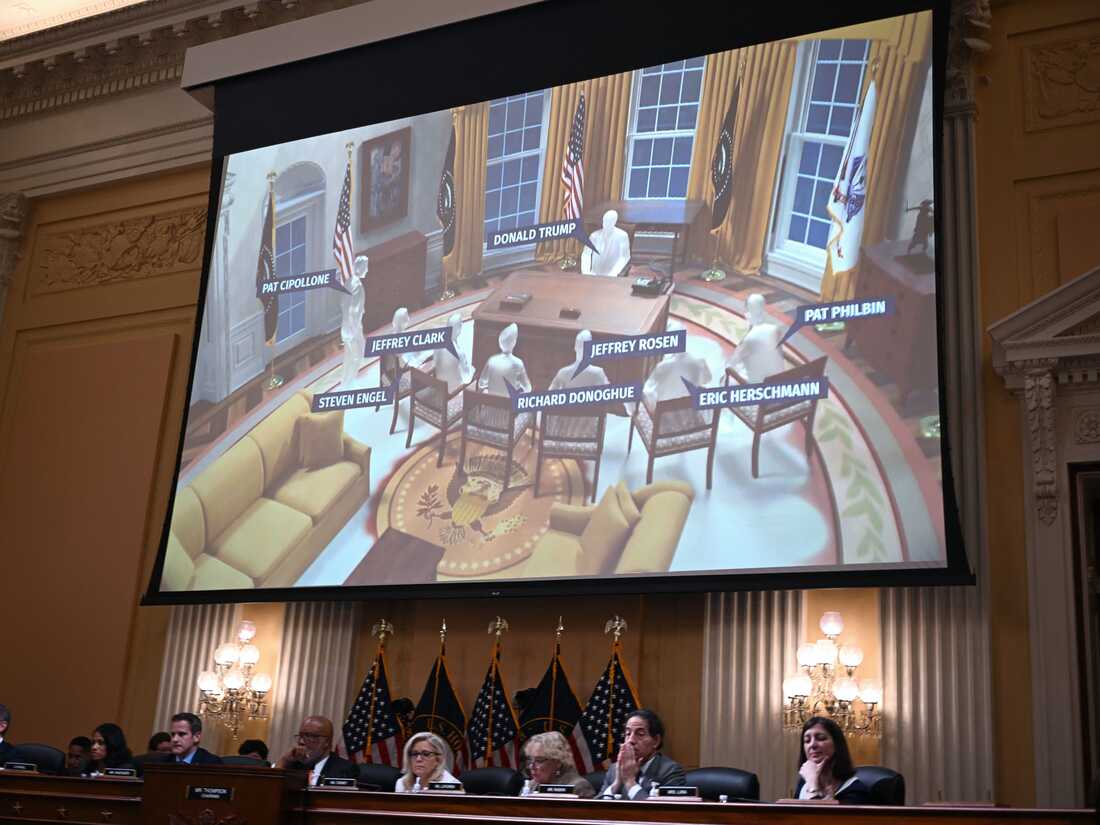 An illlustration of a meeting at the Oval Office of the White House appears onscreen during a hearing by the House select committee to investigate the Jan. 6 Capitol attack in Washington on Thursday.

An illlustration of a meeting at the Oval Office of the White House appears onscreen during a hearing by the House select committee to investigate the Jan. 6 Capitol attack in Washington on Thursday.

Witnesses in today’s hearing revealed details of a dramatic Oval Office meeting on Jan. 3, 2021, in which top Justice Department officials banded together to prevent Jeffrey Clark, an environmental lawyer at the DOJ, from replacing acting Attorney General Jeffrey Rosen.

Trump was keen to install Clark, an ally, in order to wield the powers of the DOJ to overturn the results of the 2020 election.

The meeting took place a day after Clark had told Rosen and acting Deputy Attorney General Richard Donoghue that Trump had asked him to consider replacing Rosen. Clark doubled down on claims that there had been fraud in the election and acknowledged he had had continued discussions with Trump, despite assuring the pair a week prior that he wouldn’t engage in conversations with the president.

On Jan. 3, Clark told Rosen the “timeline had been moved up” and that Trump had offered him the top job and he was accepting it. Following that meeting, Rosen called then-White House Chief of Staff Mark Meadows to set up a meeting that night with the president. Included in the meeting were White House Counsel Pat Cipollone and Steven Engel, assistant attorney general for the Office of Legal Counsel.

Ahead of the meeting with Trump, Donoghue assembled a conference call with assistant attorneys general and asked what they would do if Clark was installed as head of the department. He testified that those in the meeting “said they would resign en masse.”

Rosen said Trump “turned to me and said — ‘Well, one thing we know is you, Rosen, you aren’t going to do anything. You don’t even agree with the claims of election fraud, and this other guy at least might do something,'” referring to Clark.

“I said, ‘Well, Mr. President, you’re right that I’m not going to allow the Justice Department to do anything to try to overturn the election. That’s true,” Rosen recalled. “‘But the reason for that is because that’s what’s consistent with the facts and the law, and that’s what’s required under the Constitution.'”

Donoghue eventually joined the meeting and recalled Trump asking, “What do I have to lose?” in replacing Rosen with Clark.

“It was actually a good opening because I said, ‘Mr. President, you have a great deal to lose,'” he testified. “I began to explain to him what he had to lose and what the country had to lose and what the department had to lose, and this was not in anyone’s best interest. That conversation went on for some time. Everyone essentially chimed in with their own thoughts, all of which were consistent about how damaging this would be to the country.”

The conversation turned to whether Clark was qualified to run the Justice Department.

“It was a heated conversation. I thought it was useful to point out to the president that Jeff Clark simply didn’t have the skills, the ability and the experience to run the department,” Donoghue testified.

“I said, ‘Mr. President, you’re talking about putting a man in that seat who has never tried a criminal case, who’s never conducted a criminal investigation. He’s telling you that he’s going to take charge of the department — 115,000 employees, including the entire FBI — and turn the place on a dime and conduct nationwide criminal investigations that will produce results in a matter of days. It’s impossible. It’s absurd. It’s not going to happen and it’s going to fail.'”

Donoghue said Trump asked him what he would do if he replaced Rosen with Clark.

“I said, ‘Mr. President, I would resign immediately. I’m not working one minute for this guy,'” he replied.

Donoghue told Trump he would lose his “entire department” if he moved ahead.

“Within 24-48-72 hours, you could have hundreds and hundreds of resignations of the leadership of your entire Justice Department because of your actions. What’s that going to say about you?” Donoghue remembers asking.

According to Donoghue, Cipollone was supportive of the DOJ and said Clark’s plan to send a letter to states about election fraud was a “murder-suicide” pact.

Donoghue said Clark would be “left leading a graveyard,” a statement he said had an impact on Trump, who ultimately decided not to fire Rosen.