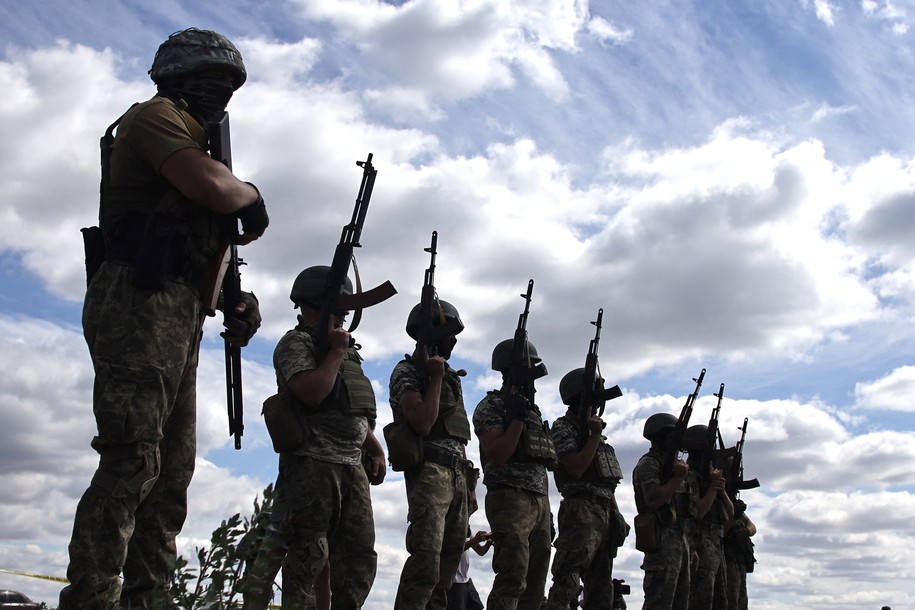 On Wednesday, I started an update on the situation south of Severodonetsk several times, and each time I updated a map, or wrote several paragraphs of text, I found myself having to change that information well before it was ready to publish. Things haven’t settled down much since then, so consider this an update likely soon to be an outdate.

On Monday, Russia broke through the lines at Toshkivka, then rapidly advanced to Myrna Dolyna just a few kilometers from the Ukrainian strong point at Lysychansk. Not only did that action set up a potentially important confrontation that could tell the future of Ukraine’s eastern salient, it left Ukrainian forces at Zolote in a “pocket” with rapidly closing Russian control on both sides. By Tuesday there were reports that Ukrainian forces were streaming out of the pocket, leaving only a token forces to hold back Russian advances and secure an orderly withdrawal.

Footage of combat around Toshkivka town in Luhansk Oblast of Ukraine, that was captured by Russian forces a few days ago.

Area was covered in smoke due to shelling. A Russian tank firing at residential buildings and artillery strikes can be seen. Multiple buildings were on fire. pic.twitter.com/yVHJw0DvfA

Soon after that came word that Ukraine had waged a surprising defense, repulsing a Russian attack, not at Zolote, but all the way down at Katerynivka. That was several kilometers to the south, at what had been the very tip of Ukrainian-held territory for weeks. The assumption going into Tuesday was that Ukraine had long cleared out of town. Only nope.

Then came word that Ukraine had advanced to the edge of Toshkivka, the same town where Russia had made the critical breakthrough days earlier, and was once again disputing control of the town. This was happening even as Russia was advancing north of Toshkivka.

However, in the last few hours sources have indicated that the purpose of the counterattack on Toshkivka was not to try and retake the town, but only to redirect Russian attention while the remaining forces escaped from Katerynivka and Zolote. Hopefully that worked, as both villages have now been overrun. As of Noon ET, Zolote was in Russian control and the remainder of the pocket was swiftly vanishing as Russian forces closed from both sides.

Looking at this map, there’s a lot of red in areas that was under Ukrainian control last week, and every day the area in dispute seems to be getting replaced by more Russian occupation. In spite of increased artillery fire into Russian positions and frequent reports of heavy losses on the Russian side, they are continuing to advance.

On the other hand, as kos has pointed out several times, the area under discussion is a tiny part of what’s already just a small piece of the Russian invasion. To secure Lysychansk, Russia is going to have to assault Ukrainian-held positions at the top of a line of bluffs and steep hills. Even if they take it, forcing Ukraine to remove its remaining forces from Severodonetsk in the process, that’s still just a small slice off the area that Russia needs to capture if it really wants to hold the Donbas.

And the truth is that, three weeks after Russia was reportedly using “all its power” to capture Severondonetsk, and almost a month after Kadyrov’s Chechen forces put out their TikTok video pretending to be strolling through a cheerfully occupied city, fighting in Severodonetsk continues. Not only do Ukrainian forces still control much of the industrial area on the northwest side of the city, they are still contesting Russian advances in the south and in a string of suburbs. Ukraine may have lost three M777s at Lysychansk, but areas well to the south, north, and east of Severodonetsk are still being hit from somewhere.

The battle of Severodonetsk has had an incredible cost for Ukraine, but as kos has also pointed out, there are arguments that the cost has been worth it. That Russia still hasn’t taken the city almost six weeks after entering the Severodonetsk and making its capture job one … that alone has value.

While some M777s may have been taken out, more are coming. And they brought friends.

HIMARS have arrived to Ukraine.
Thank you to my 🇺🇲 colleague and friend @SecDef Lloyd J. Austin III for these powerful tools!
Summer will be hot for russian occupiers. And the last one for some of them. pic.twitter.com/BTmwadthpp

Where that picture is located isn’t clear, but the ridge in the background indicates that this isn’t the absolutely flat ground west of Kherson. It seems likely that some of these HIMARS systems are, or soon will be, adding some fire power to the defense of that eastern salient. Meanwhile, Russia continues to pile up forces around Lyman, looking for a place to establish a crossing, but all too aware of what happened at Bilohorivka. In fact, in the last day it looks like Russian troops have been moving northwest out of Lyman, headed for the bridge at Yatskivka right across from Izyum. That puts them over 20km west of Lyman and 60km west of where they tried to force the river last time. They’ve apparently decided that pontoons may not be in their wheelhouse.

CNBC today is saying the “fearsome climax as battle for Severodonetsk and Lysychansk enters last phase.” But based on what we’ve seen so far, it is never too late for Ukraine to turn the tables. However, there does seem to be one group that may have reached its expiration point.

The Chechen social media warriors made the mistake of believing the headlines the last time Ukraine was said to be withdrawing from Severodonetsk.

Chechens have been silent on TikTok recently.