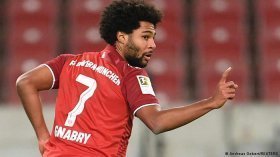 Arsenal have no plans of re-signing Serge Gnabry from Bayern Munich this summer, according to Fabrizio Romano.

The Gunners were recently keen on landing Raphinha from Leeds United, but they were outbid by rivals Chelsea.

Barcelona have since joined the pursuit of the Brazilian, and it appears unlikely that they will sign him this summer.

This has led to suggestions that Gnabry could be re-signed from Bayern, but Romano has dismissed those claims.

As per the reputed journalist, Arsenal are not looking to land the German, who has a year left on his Bayern deal.

The north London giants are looking at other alternative targets after the recent setback in the pursuit of Raphinha.

Arsenal have made three signings since the start of the transfer window.

They have recruited Marquinhos, Matt Turner and Fabio Vieira, and are expected to announce Gabriel Jesus‘ arrival.

The spending spree is expected to continue with a new left-back, winger and central midfielder among main priorities.