While advocates applaud Arlington’s new policy, they say more can be done to limit ICE’s grip 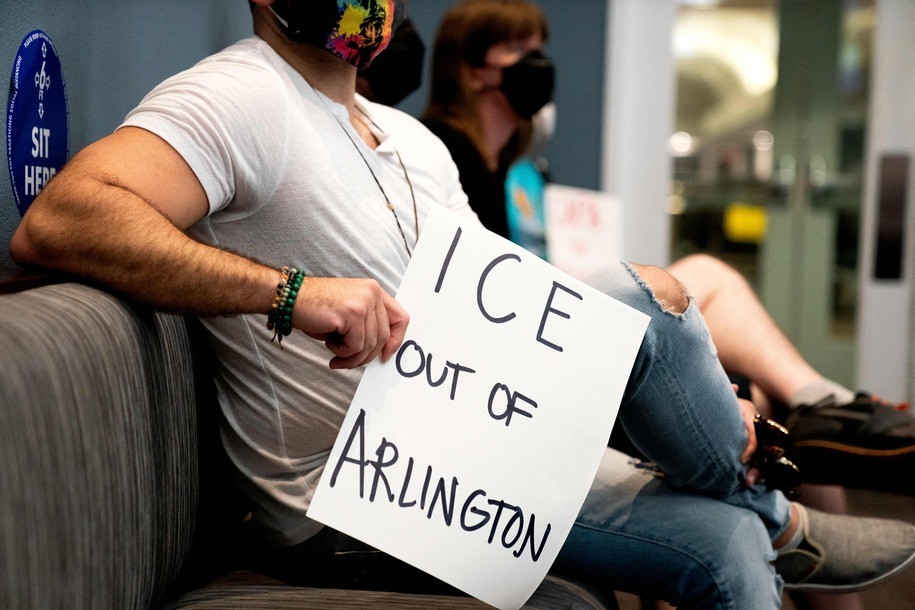 “Under the new policy, Arlington County Police officers are now required to get permission from their superiors before they can contact ICE,” but advocates say they fear that loopholes could make people of color disproportionately vulnerable. Because the sheriff’s department isn’t under the local board’s jurisdiction, none of the improvements apply to those deputies, either. LaColectiVA had been among ICE Out of Arlington Coalition members that had drafted a proposal that would have stopped any voluntary cooperation entirely.

Still, advocates hope that the policy adoption can foster greater trust among immigrant residents who may fear reporting crime even when they are victims of this crime, out of fear that their legal status may leave them vulnerable to deportation. Nor should community members be afraid of accessing public services due to their immigration status.

Despite lies from anti-immigrant officials, locally passed policies limiting cooperation with federal immigration officials actually benefit communities at large. “Counties that adopted certain sanctuary policies related to undocumented immigrants around 2014 saw a drop in both property and violent crime,” NPR reported in June. Advocates will likely continue fighting for stronger policy. “If there’s even one case in which the police are directly responsible for turning someone over to ICE, there is never going to be trust in the community,” Sandoval-Moshenberg told DCist.

The following are now prohibited:
-Requesting/Accessing/Disclosing Information
-Use of Co. Resources for Civil Imm Enforcement
-Threats or Conditioning Action Based on Citizenship or Imm Status
-Participation in Federal Registries
-Denial of Public Services Due to Status pic.twitter.com/gyAF7HlIDS

Relatedly, sheriff’s departments have the ability to severely limit their cooperation with federal immigration officials. Sheriffs have actually campaigned, and won, on ending racist ICE agreements that deputize local officers to act as mass deportation agents. Advocates in Georgia said that immigrant families in Gwinnett and Cobb counties “have been able to breathe easier,” after sheriffs Keybo Taylor and Craig Owens ended their department’s 287(g) agreements.

One reason why these deeply flawed 287(g) agreements have been so dangerous is because they’ve resulted in family separation after getting stopped for a simple driving violation. (Yes, a broken tail light has meant deportation for some families.) This is particularly terrifying for regions with large immigrant communities, like Cobb, Gwinnett, and Arlington, “where approximately one in four residents are foreign-born,” The Washington Post reported.

”We need to continue fighting though,” tweeted LaColectiVA. “The Arlington Co board refused to listen to our community and chose to side with police. They included an exception in their ‘trust’ policy (section 7 *written by the police) for police to keep collaborating with ICE.”

There is no more effective way for you to help turn out infrequent but Democratic-leaning voters in key congressional districts and Senate swing states this year than Vote Forward. Sign up to write personalized letters to targeted voters from the comfort of your home, on your own schedule, using a statistically proven method and without ever having to talk to anyone at all.