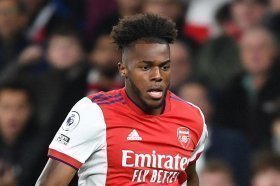 Arsenal have confirmed that Nuno Tavares has joined Marseille on a season-long loan deal.

The Portuguese signed for the Gunners from Benfica last term, and had an average first season where he was vulnerable defensively.

As a result, the Gunners entered the market to sign Oleksandr Zinchenko. His arrival has allowed them to loan out Tavares for the season.

Marseille played a key part in the development of William Saliba on loan last term. He is now on course to make his Gunners debut.

Arsenal will be hoping that Tavares can make a similar impact with Les Phoceens, but it is unclear whether he has a future with the club.

With Zinchenko and Kieran Tierney in the peak of their careers, Tavares has a difficult task on his hands of breaking into the Gunners squad.

If Tavares were to make a big impression at Marseille, the north London giants could be tempted to sell him for a reasonable price tag.