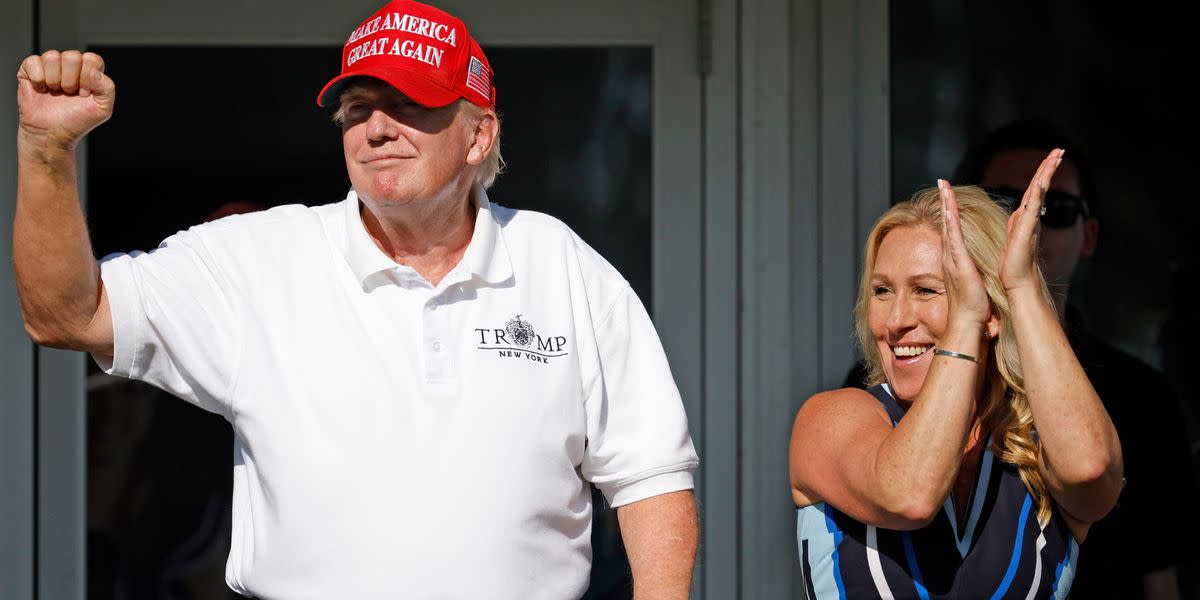 Tickets for the controversial Saudi-sponsored tournament at Donald Trump’s New Jersey golf course were reportedly going for as little as $1, and crowds were scant — but Trump and his fans tried their best to transform the tourney into a mini campaign event on Saturday.

Spectators sporting shirts bearing pro-Trump slogans in the grandstand behind the first tee erupted into chants of “Four more years!” when the former president emerged in a red “Make America Great Again” cap for the second day of the foreign-funded tournament at Trump National Golf Club Bedminster.

Later, Trump was seen raising a fist at the 16th tee watching the action alongside Christian nationalist Rep. Marjorie Taylor Greene (R-Ga.), who came to the event to applaud the Saudi tournament — and MAGA fanatics.

Trump fan Dave Teed, a local firefighter who came to the event, told Golfweek that he “can deal with” the Saudi Arabia “thing,” but it it was “China or something like that, no way. I wouldn’t be here.”

As for the actual tournament, the Washington Post scoffed that it had had thin crowds, big talk and loud music blasting from speakers across the course, “even as players lined up tricky putts.”

Trump has giddily hailed the new LIV tournament, financed by Saudi Arabia’s sovereign wealth fund, to compete with America’s own PGA tournament. The “America First” former president has called the Saudi tourney a “gold rush” that golfers should take advantage of.

But critics have bashed the LIV tournaments as “sport washing” by a brutal regime seeking to cleanse its reputation after the dismemberment-murder of Washington Post journalist Jamal Khashoggi, and its links to the 9/11 terror attacks.

Families of the victims of 9/11 and survivors had called on Trump to refuse to hold the tournament.

In an angry gathering in downtown Bedminister on Friday, Juliette Scauso, whose firefighter dad Dennis Scauso died in the 9/11 attacks, addressed Trump, asking: “How much money does it take to turn your back on your country, on the American people?”

In response to criticism, Trump on Thursday ripped the “maniacs who did that horrible thing” of the 9/11 terror attacks— but insisted that “nobody’s gotten to the bottom of 9/11.”

He also insisted to the Wall Street Journal earlier in the week that the backlash over the brutal killing of Khashoggi had “died down.” American intelligence determined that Crown Prince Mohammed bin Salman, chairman of the fund financing the tournament, ordered the dissident’s 2018 murder.

Though the Saudi government has denied any responsibility for the 9/11 terror attacks, 15 of the 19 al-Qaeda terrorists who carried out the attacks were from Saudi Arabia. After an extensive investigation, the FBI also detailed several contacts and phone calls between Saudi officials and the terrorists.

The 9/11 Families United group said said in a statement at the time that the report implicated “numerous Saudi government officials in a coordinated effort to mobilize an essential support network for the first arriving 9/11 hijackers.”

Trump himself in 2016 repeatedly pointed to the Saudis as likely culprits in 9/11.