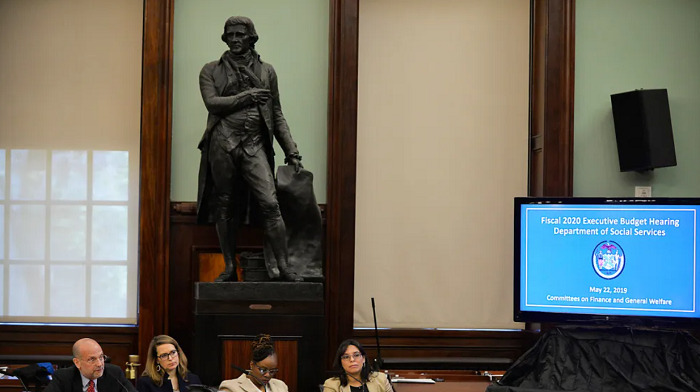 According to a New York Post report, the city’s Public Design Commission, which consists of members appointed by De Blasio, have listed “the long term loan” of the Jefferson statue on its “consent” agenda for Monday.

It will not get the privilege of public debate, and the design commission will vote on it’s removal after reviewing public comments.

Members of the city council demanded that the statue of President Jefferson – author of the Declaration of Independence – be removed from City Hall back in June.

The mayor, who has just three months left in office, is quietly banishing a statue of Thomas Jefferson from City Hall’s Council chambers — where it has resided for the past 187 years, The Post has learned. https://t.co/PMM6teKOz6

“The statue of Thomas Jefferson in the City Council Chambers is inappropriate and serves as a constant reminder of the injustices that have plagued communities of color since the inception of our country,” Council members wrote in a letter to the mayor.

“It must be removed.”

The super-woke De Blasio, who once joked about being on ‘colored people’s time,’ couldn’t have jumped at their command any faster if he tried.

City council members described Jefferson’s statue as one of several “disturbing images of divisiveness and racism in our City.”

Councilman I. Daneek Miller (D-Queens) said he expects the statue of Thomas Jefferson to be gone by next week.

A spokesperson for De Blasio told the New York Post that the statue would be used elsewhere, included in “educational exhibits” and surrounded by “valuable historical context.”

187 years, but the statue of the Declaration of Independence author has only magically turned New York City into a riotous wasteland with a murder spike for the past eight. https://t.co/hysY9q2vIF

RELATED: President Teddy Roosevelt’s Statue Will Be Removed From Museum Of Natural History

Flushing History Down The Drain

Not everybody is enamored with the idea of erasing Thomas Jefferson and his statue from New York’s City Hall.

“Someone should explain to me which civilization that banned or destroyed art has ever been considered liberal and progressive,” Councilman Joe Borelli (R-Staten Island) said during debate over the summer.

“ISIS? The Communists? The Jacobins? Henry VIII? Who, tell me.”

Reports of the Thomas Jefferson statue being banished come just months after the American Museum of Natural History announced an iconic statue of President Teddy Roosevelt was being removed.

Roosevelt is a man of such historic importance that he is memorialized on Mount Rushmore with George Washington, Thomas Jefferson, and Abraham Lincoln – widely considered some of America’s most revered presidents.

Woman to counter-protesters at the Defend Teddy Roosevelt Statue rally in NYC:

“You’re a domestic terrorist group and we will see to it that you fall and you fall so hard, you won’t know what hit you.”
pic.twitter.com/x7NPXWU7M4

Former President Donald Trump warned four years ago that the radical left would never be content tearing down statues of Confederate figures – and that statues of Washington and Jefferson would be coming down if we continue to go down this path.

Some scoffed at the notion. Others knew it was just a matter of time. The others were right.

While Roosevelt and Jefferson are no longer accepted, golden busts of George Floyd, John Lewis, and Breonna Taylor were displayed in New York City just two weeks ago.

Floyd spent many of his adult years in and out of prison. Jefferson was a Founding Father of this nation. Roosevelt joins him atop Mount Rushmore.

Now is the time to support and share the sources you trust.
The Political Insider ranks #15 on Feedspot’s “Top 70 Conservative Political Blogs, Websites & Influencers in 2021.”